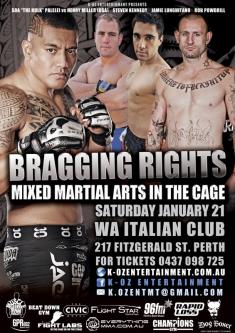 PERTH, Western Australia (January 9, 2012) – In Australia MMA is still in its infancy, but emerging as the style of choice for fight fans. On Saturday, January 21st Perth locals and visitors will have the opportunity to witness the first of many showdowns between the Americans and Aussies when the “Bragging Rights” series is launched.  The K-OZ Entertainment MMA debut main event will feature Soa “The Hulk” Palelei vs Henry Miller from the states.
Dave Mazany from Wanderlei’s Fight Team will be challenging Steve Kennedy for the middle weight strap.  Grady Stewart – Managing Director for K-OZ is bringing over DogBoxer, a Las Vegas based MMA fight team and mgmt company with 3 fighters in tow – Dave Mazany as well as Ashe Bowman a long time Lion’s Den fighter and Briggs Foreman an up and coming DogBoxer product.  “It’s been great working with Scott and I’m excited to send over DogBoxer guys and work with K-OZ”, John Miklos Moomey (DogBoxer rep)..” The fight card will also feature some of the best Perth has to offer by way of MMA veterans and emerging talent including Co-Main Event Steve “The Steamrolla” Kennedy, his brother Peter Kennedy, Rob “The Power Drill” Powdrill, Sharn Maharaj, Jack Johns, Paul Newman, Steve Wong, Blake Luovegoode, Yumi Isazuki, Uros Ljoboja and Mark Maskiell.
“Bragging Rights will be the testing ground for fighters who want to propel themselves into the big leagues but only time will tell who has what it takes to succeed. I’ll be developing the local Perth talent by bringing American fighters to test their metal and be a true international MMA promotion” asserted Stewart. “I’ve never prepared like this, it’s an awesome opportunity to beat up an American for a belt in my hometown with all my friends watching.  People are gonna sit up and take notice when I’m done with this one”, said Co-Main Event Kennedy.
“Australia is on the cusp of a major MMA breakthrough and I want to facilitate the homegrown talent, at all levels, from the ground up,” said Stewart. “Bragging Rights” has already attracted an industry following with local Perth boxing heavyweight, Mark “The Denominator” de Mori attending the event as he considers taking his trademark sexy boxing style over to MMA. VIP attendees include X-Factor contestant Johnny Ruffo and local MMA World Champion Xavier “X-Man” Lucas amongst others.
With its global networks, K-OZ Entertainment will bring the best international fighters (MMA and boxing), trainers and industry expertise to the fans with the official weigh-in scheduled for 6:30pm, Friday, January 20th at the Civic Hotel, Inglewood. Fans will have the opportunity to get up close and personal with fighters during autograph sessions and interviews. “I live in Perth and want to see the city and its reputation explode onto the scene in a major way. I encourage aspiring fighters and clubs to contact me if they’re interested in taking the next step,” said Stewart.
VIP Gold is sold out. Tickets are still available and range in price from $55 general admission to a limited number of VIP Silver Tables of ten for $2500, which include a gift bag, a 3-course meal and beverages. The winners of the “Bragging Rights” Main and Co-Main Events will be the inaugural Gladiator title holders.  As an added incentive fans who attend the weigh-in at the Civic Hotel will also see what the ladies have to offer with Sexy MMA calendar girls on show and on auction. Two lucky fans will have the opportunity to win dates with Sexy MMA talent during the “Bragging Rights” event on January 21st. Doors open at 6pm at the WA Italian and tickets are available online at k-ozentertainment.com.au.
Sporting Deals and Discount with Coupons Plus Deals
Sporting goods deals available @SearchPromoCodes
Problems with college essay writing? Essayassist.net college essay writing help is what you need.