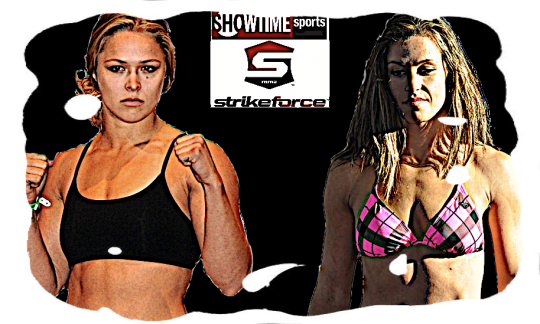 News of the bout first began circulating late last week, however, Strikeforce made the official announcement during the live broadcast of “Rockhold vs. Jardine” Friday night on Showtime.

There are those who do not feel Rousey “deserves” or has “earned” the title shot, but those are the same kind of arguments that were used against Brock Lesnar when he first joined the UFC and he ended up becoming the UFC heavyweight champion and tied the record for most heavyweight title defenses.

Much like Lesnar herself, except even more so, Rousey comes from such a high level combat sports background, the normal rules of procedure do not apply. Lesnar got a shot at the UFC heavyweight title after only one win inside the Octagon (and one loss), and only two wins total as an MMA fighter.

Yes, Lesnar was an anomaly, but so is Ronda Rousey.

Rousey has had two wins in Strikeforce, both by armbar, and both in under a minute. She submitted Sarah D’Alelio (4-2) in 25 seconds in August, then returned in November to submit Julia Budd (2-2) in 39 seconds.

Prior to signing with Strikeforce, Ms. Rousey had a total of five MMA bouts; two were pro and the other three were amateur. Guess what happened… Rousey won them all by armbar in under a minute. — So just in case you missed it, Ronda Rousey has fought a total of seven times as a mixed martial artist and she has won every bout via armbar submission in less than a minute. Total fight time over Ms. Rousey’s seven fight MMA career: 4 minutes .3 seconds.

Like it or not the Zuffa brand of MMA is not just a sport, it is also a business and they are in the business of selling fights. If you want clear cut lines to the title then watch or fight for Bellator, but in Zuffa’s world, there is an entertainment factor involved, and those fighters that can sell themselves with their performances in the cage as well as with their personalities outside the cage are going to get preferential treatment — that is just the way it is.

Tate is on a six-fight win streak. Her last loss was a decision loss to Sarah Kaufman in 2009. Since then she has racked up wins over the likes of Valerie Coolbaugh, Zoila Gurgel, Hitomi Akano, and most recently, Marloes Coenen via fourth round arm triangle choke, to earn the Strikeforce 135 pound title in July 2011.

Also expected to take place on Strikeforce’s March 3 card is a women’s bantamweight match-up between former champion Sarah Kaufman and Alexis Davis, the winner of which may get the next title shot against the winner of Tate-Rousey.