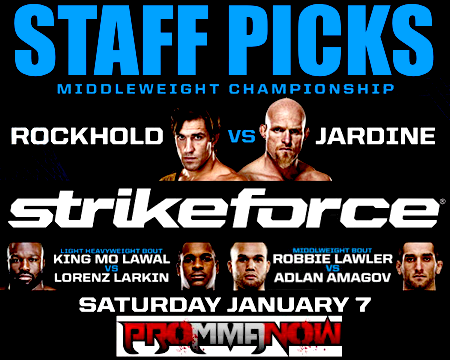 The ProMMAnow.com (www.prommanow.com) staff weighs in with their thoughts and predictions on Saturday’s “Strikeforce: Rockhold vs. Jardine” Showtime card featuring middleweight champ Luke Rockhold vs. Keith Jardine in the main event.

RICHARD MANN: A lot of people are really high on Rockhold. I may not be totally convinced that he is a future pound-for-pound great, but he has more than enough game to handle Jardine. If you watch Jardine’s fights, it is clear that anyone who can throw a solid left hook can finish him. If I can notice this, than the coaches at AKA can too. Look for Rockhold to finish this fight in the first two rounds. Rockhold by TKO.

JOSH CROSS: I don’t have much to say about this one. I think Rockhold has an advantage wherever this fight goes and I think Jardine will get finished decisively. Pick: Rockhold via TKO.

DENNY HODGE: I still don’t believe that Jardine’s fight against Mousasi was a draw, but that means nothing in this title bout match up. Rockhold showed off his well-rounded skills as he dominated “Jacare” en route to taking the title, going a full five rounds in the process. Jardine always seems to be able to sway the judges with his herky-jerky style of striking, but Rockhold will beat him to the punch in this one. Look for the champ to establish his left hand and pick apart Jardine on the feet with his kicks and combinations. Jardine will establish his kicks, but Rockhold will be effective with his counter punches off those kicks. If Jardine tries to take it to the mat, Rockhold will show off his solid takedown defense, and will be able to work back to his feet should he end up on his back. Rockhold takes this one by decision in a lopsided main event and retains his title.

JACK BRATCHER: This is supposed to be a title fight, however, Jardine was 20 lbs. over weight on Thursday, or so he said. It will be interesting to see if he makes weight and if the drastic cut hurts him. I personally don’t see any way for Jardine to win this fight. Apparently a draw against Mousasi gets you a title shot in Strikeforce these days if you drop down in weight.  Jardine has been given a gift here and he should enjoy the limelight because its not going to last. Dana White said Strikeforce is not going to be a second rate promotion…then why are they giving their champions second rate opponents? Rockhold by submission.

RICHARD MANN: Amagov has looked okay is his first two Strikeforce fights, but he has not faced the toughest competition. Lawler does only one thing. He stands in front of his opponents and throws power shots. In this fight, it might be enough. Unlike the main event, this is actually good matchmaking. If Amagov wins, we know that he is a serious prospect. Lawler by TKO.

JOSH CROSS: I think Lawler will be looking to keep this fight standing while Amagov should have the best chance to win if he can take the fight to the mat. Lawler has had the most success on his feet, and the least success on the ground. Amagov is known for his world-class wrestling and I think he’ll be able to take Lawler down and submit him. Pick: Amagov via Submission.

DENNY HODGE: Lawler’s one-punch power is well known, and Amagov has some power of his own, winning by (T)KO in 6 of his 9 wins. He tends to get wild at times, so I expect there to be instances where these guys stand in the pocket and throw bombs. Lawler usually wins in those types of exchanges, so it’s a dangerous game to play. This one will be a slugfest that ends brutally. Lawler by KO.

JACK BRATCHER: This is the biggest fight of Amagov’s young career and it’s possible Strikeforce found someone Lawler can beat. If Lawler loses this one he needs to start thinking about hanging it up. He’s lost four of his last six fights. Amagov has knocked out three of his last four opponents and chances are you’ve never heard of any of them. His only loss was back in 2007 in his pro debut. Lawler’s experience and power may be enough to win. Lawler by KO.

RICHARD MANN: Larkin is still mostly a striker at this point in his career. Lawal should have very little trouble getting takedowns and doing work from the top position. People seem to have totally given up on the former Oklahoma State wrestler, but he is still a former champion with a sneaky striking game. Hopefully his knee can stay together, and he can make the move to the UFC. Lawal by decision.

JOSH CROSS: Despite being 12-0, Larkin is facing in my opinion his toughest opponent yet in Lawal. Lawal just has too much experience fighting top level guys that I think he could win this fight on experience alone. Larkin’s striking is nothing to take lightly, but I think Lawal should be able to finish Larkin decisively in this fight. Pick: Lawal via TKO.

DENNY HODGE: I’ve been impressed with Larkin, but in his last outing he wasn’t as dominating as he should have been against a very late replacement in Nick Rossborough. King Mo won’t allow Larkin to get in a groove from the outside, and will stifle his attacking style. Look for Mo to dominate the action in this one. I just don’t see this bout going very long. King Mo by ground-and-pound stoppage.

JACK BRATCHER: When you look Larkin’s record, few of the names are recognizable. When you look at Lawal’s record, all of the names are well known solid fighters. Larkin is a solid striker but we have never really seen him on his back. This is going to be a good fight to gauge just where Larkin is in his progression as a true MMA fighter. Although he came in as a world class wrestler, Lawal knew from early on he needed a complete game. He has heavy hands and he generally knocks out lesser strikers. He likes to entertain, so there is a chance he could try and stand with Larkin. If Lawal needs to, he should be able to pout Larkin on his back at will. However, if he chooses to give the fans a show and try to prove a point with his striking, it could get interesting. Lawal by decision.

RICHARD MANN: Mein is one of the mythical new generation of fighters. He has been training MMA since the beginning of his career. He did not start as a wrestler, grappler or striker and then convert. People seem to think that this method will be the most effective, but it will hurt Mein here. He is a solid overall fighter, but he will not be able to deal with Woodley’s wrestling. Look for the former Missouri Tiger to take a dominate decision. Woodley by decision.

JOSH CROSS: I think this is going to be a good test for Woodley who is currently 9-0 in his professional career. Many have picked Mein to upset Woodley in this fight, and while he will probably give Woodley some trouble standing, I think that in the end Woodley will be able to get the takedown and control the fight enough to get the decision victory. Pick: Woodley via Decision.

DENNY HODGE: Some fans don’t appreciate the overall style of Woodley, but that fact is, he’s still undefeated and normally dictates where and how a fight goes down. Mein is an exciting striker with very dangerous combinations including big-time elbows. Facing the wrestling of Woodley could cause Mein to be more cautious and not let his hands go. He will likely be taken down repeatedly by Woodley, so he might as well use every opportunity to get off while he’s on his feet. Mein will be effective while the fight is on the feet, but I just don’t see him being able to thwart the relentless takedowns and the raw athleticism of Woodley. Woodley will win this one by decision.

JACK BRATCHER: Woodley’s striking continues to improve, as does his submission game, however, wrestling is still his bread and butter and it is going to give him the edge against almost every opponent who did not spend their entire lives on the mat. Although Mein started fighting at an early age and his stand-up is light years beyond Woodley, he still comes in as an underdog because of Woodley’s phenomenal base. Woodley’s record is perfect for a reason. He may not always be the most exciting fighter on the card, but he gets the job done. Woodley by decision.

RICHARD MANN: Stinson is a solid fighter that does not really excel in any specific area. Saffiedine is a dynamic striker, who has actually picked up the wrestling game very well. Look for Saffiedine to land straight punches and leg kicks and get a late finish. Saffiedine by TKO.

JOSH CROSS: This should be an exciting fight as soon as the bell rings. Stinson is known for being able to knock out his opponents in under a minute, which is what he did in his last fight when he finished Eduardo Pamplona in a mere 15 seconds. As long as Saffiedine is cautious enough to avoid Stinson’s wild but powerful shots I think Saffiedine will be able to use what I think is his more well rounded and refined skill set to get the win. Pick: Saffiedine via Submission.

DENNY HODGE: Stinson is coming off a quick KO victory, but will be outgunned on the feet against Saffiedine. Saffiedine will look to stay on the outside and land his combinations, and may even take the fight to the mat and go for submissions. The wrestling of Stinson isn’t overly dangerous to Saffiedine, and if it does goes to the ground, Saffiedine should be able to threaten with ground-and-pound and submissions. Saffiedine likely won’t finish the very tough Stinson, but will be able to do damage en route to a unanimous decision victory.

JACK BRATCHER: Stinson should not be underestimated. The guy is extremely experienced for only 25 years of age. However, Saffiedine is part of Team Quest and has been competing at a higher level. Saffiedine by decision.