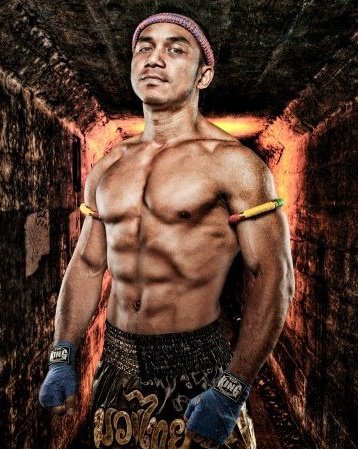 You know the old saying, don’t play with fire, you might get burnt. In the case of Ayung Jumat, you might not get burnt if you mess with this guy but you just might get punched in the face. We are proud to introduce this hot MMA prospect from Malaysia, Ayung Jumat aka AJ Pyro. Pyro, like he is affectionately called, is a professional Muay Thai fighter and has won several no-gi grappling tournaments, and on January 7, he’s got an opportunity to set the Asian MMA scene on fire.

Pyro is going to step up his game and compete at Bangkok’s DARE Championships against Majee Overall, a Brazilian Jiu Jitsu purple belt training out of Phuket Top Team. We recently spoke with AJ Pyro about his very young career and also his views and thoughts of Dare Championships and his upcoming fight with Majee Overall.

There isn’t much known about you online, could you introduce yourself and tell us about AJ Pyro?

My name is Ayung Jumat (A.J) the Pyro is my fight name! You can call me AJ Pyro! I’m from Sabah, Borneo a state of Malaysia.

From the DARE preview of your fight, it’s said that you work as a personal trainer. How did you get into becoming a fighter?

Yes, I’m a personal trainer and have been doing it 13 years! When I was a teenager, I was active in competing in Silat Olahraga (a Malay martial art) and I used to always be involved in street fights. That’s bad though and I’m not proud of it. Stay away from street fights kids. If you want to fight do it in the cage instead!

You train in both Brunei and in Singapore with Juggernaut Fight Club. Why did you choose to come to Singapore to train?

I train with my fight team Borneo Tribal Squad at my hometown, Kota Kinabalu, Sabah Borneo. I also train at Juggernaut Fight Club (Singapore) because I knew the owner, Arvind Lalwani since 2009 when we worked/trained at different gyms before he opened up Juggernaut Fight Club .He’s a cool guy, a great fighter and trainer. It’s awesome that he opened JFC. He brought in quality trainers for Muay Thai (Kru Turbo from Legacy) and Brazilian Jiu Jitsu (Una Noviao black belt, Prof. Rodrigo Praxedes). Arvind is the boxing coach for his gym. JFC has a very systematic program that encompasses striking, grappling, and strength & conditioning. All great for MMA and it suits me very well! I had my 2 weeks intensive training there and I definitely will be back training at JFC soon!

You’re originally from Borneo. What’s the MMA scene in Borneo like? Is MMA popular over there?

We have few gyms in Borneo (Sabah, Sarawak and Brunei) that do Muay Thai, BJJ and boxing. People in Borneo love MMA so much but we don’t have much oppurtinity to fight here. There is no MMA fight promoter here. I myself have to fly to Kuala Lumpur to get a MMA fight. Now I’m fighting under DARE Championship. Its an honor to encourage Borneo fighters to step up. I have my own fight team, Borneo Tribal Squad. We train Muay Thai, BJJ, wrestling, boxing, MMA and strength and conditioning. Some of my fighters will be fighting in Kuala Lumpur in January 2012.

What’s your fight style? Are you a stand up fighter or a grappler?

I’m a professional Muay Thai fighter with a 7-1 record. I also train my BJJ with Borneo BJJ and won a few medals in the no-gi categories at the Philippines Open and Bangkok BJJ Open this year. I love wrestling so much, I trained my wrestling for a month (April/May 2011) at Xtreme Couture, Toronto under ex-Iranian Olympic Coach Rahman. My wrestling training with New York State Champion, Andrew Leone from JFC also improved my techniques and skills alot! I think my 23 years of hardcore rugby helped me a lot to adapt to wrestling and Brazilian Jiu Jitsu.

How did you get the Nickname “Pyro”?

“Pyro”! (Laughs) its because every time I hit your with my 8 limbs and my takedowns, slams and ground & pound, you’ll always feel the burn!

You have an upcoming fight at DARE 1/12 against Major Overall? How is your training coming along and are you ready to fight?

Training has been fun and intense. Sometimes I forget what day it is! My life and mind is always in the gym. I’m 100% for war. We from Borneo are warriors and always ready for war!

Why do you think you’re better than Major Overall?

I respect every one of my opponents but I think I’m physically and most importantly, mentally stronger than him.

If you have anything to say to your opponent Major, what would it be?

I knew he has been training super hard and I love that. I know he is a dangerous and smart fighter. I love that too but I know that I will destroy him!

Would you say that the fight at Dare Championship is the biggest fight of your career?

My fight in DARE Championship is definitely the biggest fight in my career!

I don’t really think about the money. I’m more excited to get the fight!

What is your ultimate goal in MMA? Would you want to fight for Asia’s biggest show, ONE Fighting Championship?

I really enjoy every moment about MMA in my life. I train every single aspect about it, from striking to grappling to strength & conditioning. I love the discipline, respect, friendship and healthy lifestyle you get from training MMA. I would love to fight in ONE FC especially at their event which will be held in Malaysia next year!

Do you have any parting words for your fans, friends and the people who are planning on going to DARE to see you fight?

I have my supporters will fly to Bangkok to support me. Some cant make it but will watch online pay per view. Thanks for the support and wishes. Also big thanks to Juggernaut Fight Club (Singapore), Sinbi MuayThai (Phuket), Borneo BJJ, Xtreme Couture (Toronto) and my fight team Borneo Tribal Squad, BOOM!

Fight fans can watch AJ Pyro in action at the DARE event this Saturday night at 6 p.m. ET right here on ProMMAnow.com, on our Live MMA Events page, courtesy of GoFightLive.