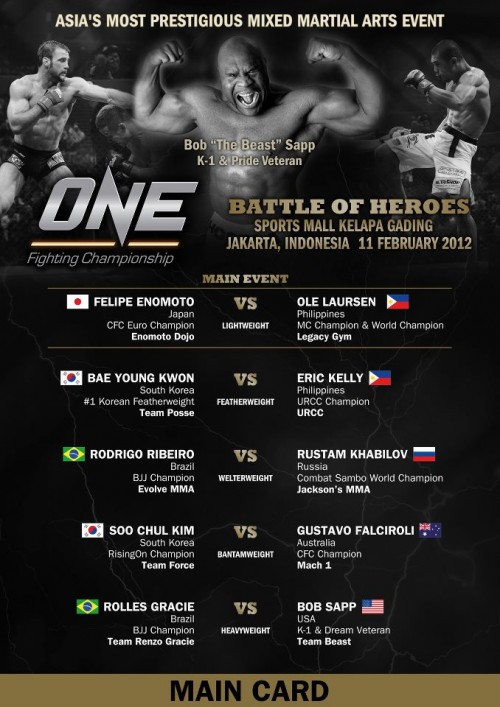 This is the one we’ve all been waiting for. While rumors and rumbling of the ONE FC 2 card have been floating around the Internet, nothing has been confirmed…. until now. The official main card has finally been released and it looks stacked.

As mentioned yesterday, Bob Sapp will be facing Rolles Gracie in a heavyweight bout. In the main event we’ll be seeing MFC Champion Ole Laursen go one on one with the very tough Felipe Enomoto who is a CFC Euro Champion. Laursen was supposed to be in the main event of the first ONE FC show in Singapore but was sidelined with an injury during training. Look for this to be a very physical and exciting main event.

ONE FC 2 – Battle of Heroes will be held at the Kelapa Gading Sports Mall in Jakarta, Indonesia on the 11th of February. ONE FC’s first show at the Singapore Indoor Stadium last year was a huge success and we expect nothing less from their second show in Indonesia. Keep an eye out on TFN for more news on the under card and more ONE FC news which will be released shortly.