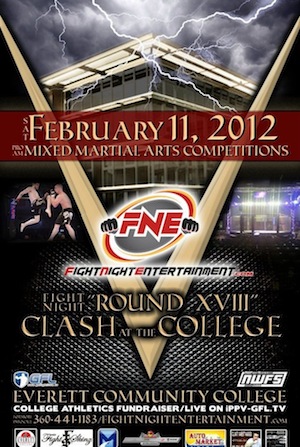 She has submitted her last three opponents, most recently taking out Chelsea Colarelli (6-4) via second round rear-naked choke submission at “Blackeye Promotions: Breast Cancer Beatdown” this past October.

Krumdiack (9-4) has been fighting professionally since 2006. For what it is worth, she holds a first round submission (armbar) win over Coolbaugh, the only woman to best Vidonic, albeit it was in Vidonic’s pro debut.

Krumdiack has been in the cage with some of the sport’s biggest names, including Rosi Sexton (12-2) and Tara LaRosa (20-2), both currently ranked in the top five. Krumdiack last fought in July 2011, scoring a second round armbar submission win over SarahWard-Maloy (2-2) at Freestyle Cage Fighting 48 in Oklahoma.

“Fight Night Round XVIII: Clash at the College” will stream LIVE on ProMMAnow.com’s Live MMA Events page courtesy of GoFightLive.

Also on the card are four other professional bouts, including a 130 pound women’s bout between Strikeforce veteran Colleen “Beautiful Disaster” Schneider (1-3) and XFC veteran Marissa “Shorty” Caldwell (2-5), and a 117 pound women’s match-up between Michele “Diablita” Gutierrez (3-2) and a yet to be determined opponent.

The full fight card* for “Fight Night Round XVIII: Clash at the College” is as follows:

*Card subject to change without notice.

For more information on the Fight Night Entertainment promotion and Fight Night Round XVIII check out the FNE website at www.fightnightentertainment.com.