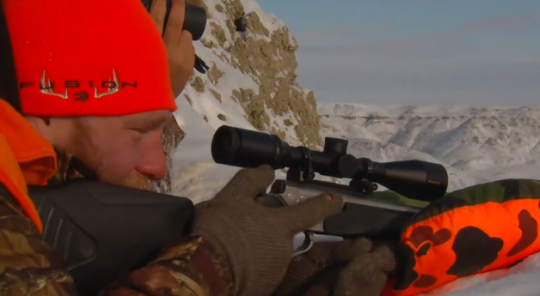 Former UFC heavyweight champion Brock Lesnar has been fined $1,725 and suspended for six months… but not from fighting — from hunting.

That’s right. The 6 foot 3 inch nearly 300 pound former WWE superstar failed to follow the exact legal procedure for tagging a mule deer he shot during a November 2010 hunting trip in Canada sponsored by Fusion Ammunition and guided by Trophy Hunters Alberta (which can be seen in the video below).

According to a report from The Canadian Press, Lesnar explained:

“In Alberta, Americans can’t hunt without a licensed outfitter. The outfitter is there to make sure you follow the rules. I had two deer tags for the trip which meant I could legally shoot two deer. On the first day of the trip, I shot a mule deer. On the second day, I shot a white tail. Video from the hunt has been on the internet for over a year. After I shot the mule deer, I failed to immediately tag it. As far as I was involved, that’s all there is to it.”

“It’s the kind of thing that happens to hunters all the time. I want to thank the Canadian authorities for their cooperation in resolving this misunderstanding. I love Canada and I can’t wait to go back to Alberta for a hunt.”

A lawyer representing Lesnar appeared in a Medicine Hat, Alberta, court this week entering a guilty plea on his client’s behalf to the improper tagging.

Lesnar was also charged with leaving meat to rot and illegal possession of wildlife, but those charges were dropped. He was accused by fish and wildlife officials of shooting a mule deer buck but only packing the trophy head out.

Lesnar said he was not allowed to bring the meat across the border, but had hired a professional outfitter to handle the situation and as far as he knew it had been handled appropriately.

Now that Lesnar has paid the fine, he said the matter is closed and he can focus on his upcoming fight.

Lesnar is scheduled to return to the Octagon on Dec. 30 when he faces former Strikeforce heavyweight champion and  2010 K-1 World GP champion Alistair Overeem in the UFC 141 main event.

Here is a video of the hunt in question:

One thought on “Brock Lesnar pleads guilty to hunting charge”