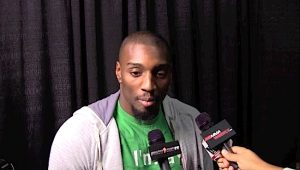 UFC light heavyweight Phil Davis spoke with a group of media members including ProMMAnow.com (www.prommanow.com) over the weekend at the “Strikeforce: Melendez vs. Masvidal” event in San Diego.

Davis talked about his upcoming bout against former UFC light heavyweight champion Rashad Evans which will serve as the main event when the UFC returns for their sophomore appearance on FOX on January 28.

Although Davis admits Evans has gotten better over the years,he also does not think his game has changed much and refers to him as “the same old Rashad”. When it comes to their wrestling game, Davis said, “The problem is we’re both known for excellent wrestling, but only one of us actually has it.” (Hint: He’s not referring to Evans).

Davis explained how jiu-jitsu could be a wild card factor in the fight and plans to find out how good Evans is off his back. Davis remained mum on the Penn State comments from Evans, and on a personal level said Evans is a family man and feels he is a good guy.

Be sure to check out more exclusive interviews and ProMMAnow.com coverage from “Strikeforce: Melendez vs. Masvidal“. Also, see more UFC on FOX 2 coverage.