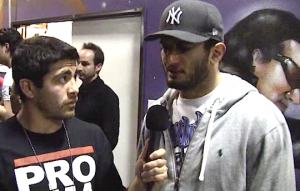 Mousasi said he was happy with his performance in the first two rounds but not in the third. He also discussed the improvement in his wrestling, said it is getting better but the next step is to move his training camp to the U.S.

Mousasi revealed he was sick before the fight and that he should have trained better, but also admits it is difficult because he does not have the right people around him and that is why he wants to move his next camp to Los Angeles, specifically mentioning Gokor’s and Dan Henderson’s training facilities.

As far as what’s next for Mousasi, he suggests a possible four-man elimination between himself, Mike Kyle, King Mo and Feijao would be nice to see who gets to fight for the title, but ultimately says it is up to Scott Coker and the matchmakers. Be sure to check out our other exclusive post-fight interviews from Saturday night’s “Melendez vs. Masvidal” event.