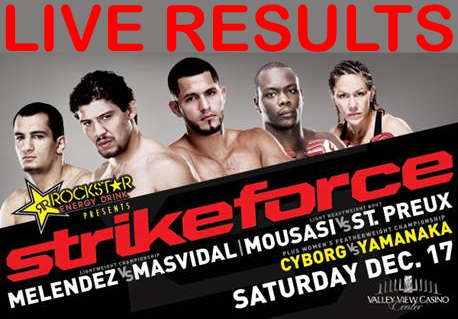 ProMMAnow.com (www.prommanow.com) will provide LIVE results and play-by-play commentary of tonight’s event. In the meantime be sure to check out our ProMMAnow.com “Strikeforce: Melendez vs. Masvidal” staff picks to see our breakdown of each of the main card bouts.

Press F5 on your keyboard to refresh the page as fight results and play-by-play will be updated in real time following each round of action.

Cris Cyborg is wearing a shirt that says “Who’s the Man”. Oh goodness.

Round 2 – OSP needs to let his hands go if he’s going to fare any better this round. High kick from OSP blocked. He shoots, stuffed. Mousasi trips OSP to the ground with great technique. Full guard. Mousasi stacks up. On top in half guard is Mousasi, lands a couple elbows. Three minutes to go. Elbow from Mousasi. Ref warms Mousasi to improve. Ref stands them up. Big leg kick from Mousasi. Lunging knee from OSP but Mousasi catches it, ends up on his back though with OSP on top inside full guard. Ref tells him to improve it. OSP in side control. Elbow to the body, and a few punches. Less than a minute to go though. OSP in half guard. Mousasi gets up. Misses a head kick. And OSP misses one. Shoots, stuffed. PMN scores the round 10-9 Mousasi.

Round 3 – Leg kick from Mousasi. Lunging knee from OSP. Clinched against the cage. Knee from OSP and Mousasi gets the takedown. Trying to take OSP’s back. OSP turns around, grabs a single. OSP swoops him down and ends up in side control. OSP looking for crucifix. Full mount, Mousasi tries to esacape. OSP controls him but Mousasi gets up. drives all the way across the cage and takes OSP’s back. OSP gets up, Mousasi tries to drag him down, and ends up on bottom but scrambles to top position. This stupid ref keeps telling them to work and they have been scrambling. OSP spins around but ends up on his back. Mousasi on top in half guard. Regardless, this is a great learning experience for OSP.  OSP gets out and up lands a straight left. Under a minute to go. OSP on top now with 30 seconds to go. OSP locks on a D’arce but time runs out. Wow! He won the round but lost the fight in my book. PMN scores the round 10-9 for OSP, but the fight for Mousasi 29-28. We saw OSP go for the finish but just a little too late. Great gutsy fight by both guys. I don’t see this as a setback for OSP.

Round 1 – It has been so long since Cyborg has fought, she is ready to unleash the beast. They touch gloves by direction of the referee. Yamanaka comes out ready to bang — not a smart move. Cyborg gets the better of the exchange and Yamanaka goes down from a right hook. She makes her way up but gets dropped again. Cyborg stacks her up against the cage with big punches and the ref stops it. — Camera pans to Ronda Rousey who looks excited.

Cyborg said she thinks Rousey speaks too much and says, “Bring her on, I’m ready.”

Big John is a judge tonight. And that is a good thing.

Masvidal’s corner seems to be acting like he’s winning the fight or something. Very bizarre.

“This is my belt, he needs to take it from me,” said Melendez. Melendez said they need to bring some people to challenge him, bring in the UFC guys. — The commentating crew is having a hard time reading the prompter after the bout.

4 thoughts on ““Strikeforce: Melendez vs. Masvidal” LIVE results and play-by-play”