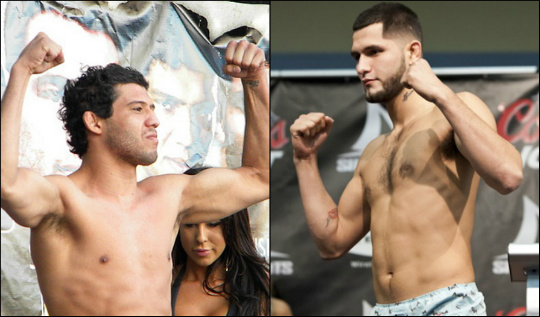 This Saturday night, Dec. 17, Strikeforce will close out their 2011 season LIVE on Showtime with “Melendez vs. Masvidal” from Valley View Casino Center in San Diego, Calif., starting at 10 p.m. ET/PT.

Strikeforce CEO Scott Coker believes Gilbert Melendez is the number one lightweight fighter in the world. And he may be, but we will never know that until he fights in the UFC or until they match him up against the UFC’s top lightweights in some type of co-promotion which UFC President Dana White has hinted may happen.

What we know is that Melendez was not entirely happy being the champion of a lame duck promotion. That was at least until it was announced this week Showtime had renewed their contract with Strikeforce, and White made a point to announce Melendez was now extremely happy in his position as Strikeforce champion.

Melendez, 29, has won his last five fights in a row; three by knockout, two by unanimous decision. After defeating Josh Thomson in Dec. 2009 to win the Strikeforce lightweight title for a second time, he has had successful title defenses against Shinya Aoki, in April of last year, and Tatsuya Kawajiri, in April of this year.

Masvidal can hang with most opponents on the feet, but the trouble Melendez is going to pose for him will primarily be his wrestling. Melendez’s hands have improved greatly over the past couple years and it will be interesting to see if he can find success on the feet against Masvidal. Make no mistake though, if Melendez wants this fight on the ground, that is where it will go… or will it?

Much will depend on how Masvidal’s wrestling and takedown defense have improved.

Neither fighter has a strong submission game. In fact, they both only have one win each via submission, and Melendez’s submission win came by way of punches.

It should be noted Masvidal has been a lot more active than Melendez over the past couple years. Masvidal has already fought twice this year, while Melendez has only fought once. Last year Masvidal fought three times. Melendez fought once.

Last thing, Melendez has never been stopped, while Masvidal has been stopped once by TKO and twice by submission (who could forget Toby Imada’s “submission of the year” winning inverted triangle).