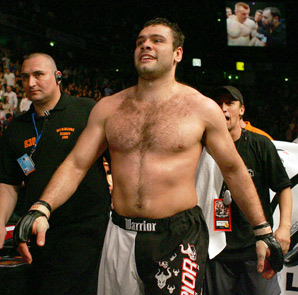 Gonzaga is replacing Rob Broughton at UFC 142. The Englishman was forced to witdraw due to injury. The bout is the first of a new four-fight contract Gonzaga has signed with the UFC.

The news of Gonzaga’s return to the UFC was first announced on the Team Link website earlier today.

Now 32-years-old, Gonzaga made his UFC debut back in 2005 when he knocked out Kevin Jordan with a Superman Punch at UFC 56. A dangerous BJJ black belt with seven of his 12 wins coming by way of submission, Gonzaga is also known for his knockout power.

He stunned the world by knocking striking legend Mirko Cro Cop out cold with a head kick at UFC 70 in April 2007. With 18 fights under his belt, “Napao” has only gone to a decision once in his career.

After back-to-back losses to Junior Dos Santos and Brendan Schaub (the one decision) in 2010, Gonzaga was released from the UFC. At that point he had indicated he was only going to compete in grappling tournaments and was considering permanent retirement from active MMA competition.

A year later, in October 2011, Gonzaga returned to MMA action against Connecticut’s Parker Porter (5-3) for the Reality Fighting Heavyweight Title. Gonzaga won the title via third round arm-triangle choke submission.

The 6 foot 7 inch Edinaldo Oliveira is a newcomer to the UFC. He is undefeated with eight wins via knockout, two via submission, and like “Napao”, he is also a BJJ black belt. He has spent his entire career fighting in Brazil and is coming off back-to-back knockout victories over Jair Goncalves and Nalzinho Novaes.