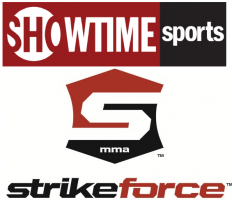 After months of deliberation Showtime and Strikeforce have reached a new broadcast agreement that will keep LIVE MMA events from the Zuffa-owned mixed martial arts promotion on the premium television network.

Strikeforce and Showtime made the official announcement via press release, followed by a media conference call (listen to the audio) to clarify the details, on Thursday.

Under the new agreement Showtime will televise six to eight live events during 2012, starting with “Rockhold vs. Jardine” on Saturday, Jan. 7, which will broadcast during Showtime’s Free Preview Weekend and make the event available in 60 million homes*.

Also, beginning with the Jan. 7 event, fans at home will be able to watch entire Strikeforce cards from start to finish. The preliminary card for “Rockhold vs. Jardine” and all future cards will air LIVE on Showtime Extreme then crossover to the main card on Showtime.

Strikeforce’s heavyweight grand prix will conclude in 2012 when Josh Barnett battles Daniel Cormier in the finals. The winner will fight one more time in Strikeforce and then they are doing away with the heavyweight division.

Whether or not Barnett, Cormier and other Strikeforce heavyweights will then transfer over to the UFC has not yet been determined. It is assumed at least some of them will.

The other weight classes currently used by Strikeforce will continue, including the women’s 145 and 135 pound divisions. UFC President Dana White and Showtime executives drove the point home on Thursday’s call that Strikeforce is not a second class promotion and will not be operated as such.

When asked if Strikeforce fighters will get to compete against their UFC counterparts, an idea that has been tossed around since Zuffa purchased the promotion earlier this year, White initially side-stepped saying, “I’m excited about this deal and let me put it to you this way, I’ve got the guys at Strikeforce fired up about it too. So, I’m very involved in this and the guys at Strikeforce are going to be very happy to be there.”

When asked to clarify, if that meant yes, or just maybe, White said, “That’s a hell yes.”

That is big news for Strikeforce fighters, including lightweight champion Gilbert Melendez, who has publicly expressed his desire to move to the UFC in recent months due to his feeling that holding his Strikeforce title meant very little knowing most of the top 155-pound fighters in the world are in the UFC.

For Canadian fight fans, Strikeforce will continue to air on Super Channel.

*Although Showtime and UFC executives would not disclose exactly how many years the agreement is for, they did say it guarantees Strikeforce 6-8 events per year on Showtime with the option to renew. An educated guess would speculate the current agreement is only for one year.