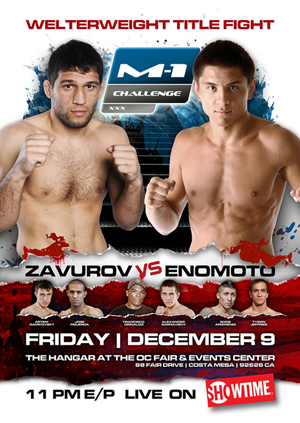 M-1 Challenge 30 takes place this evening at The Hangar in Costa Mesa, Calif., and features a welterweight championship match-up between Shamil Zavurov and Yasubey Enomoto in the main event. M-1 Challenge 30 airs LIVE on Showtime starting at 11 p.m. ET. ProMMAnow.com (www.prommanow.com) will provide LIVE results and play-by-play commentary throughout the event.

Press F5 on your keyboard to refresh the page as results will be updated in real time following each round of action.

Round 1 –  Touch gloves. Quach with a leg kick, eats a counter right. Leg kick from Quach. They slug it out before Quach puts him on his back with a double leg, lands in north-south position. Now in side control on top. Knee to belly, mounts, Cacdac escapes to his feet. Pushes Quach to the corner. Ref warns Quach for strikes to the back of the head. They separate to the center. Jab from Cacdac. They swing it out with big heavy punches. Cacdac gets the better of the exchange but Quach comes back with a head kick. They scramble, Goes back to the ground where Quach sinks a north-south choke. Cacdac escapes, but gets mounted. Quach goes for an armbar after landing a few punches, switches to a triangle, beautiful transition and Cacdac taps out. Very entertaining fight.

Round 2 – Jeffries gets a takedown early, ends up sinking in a guillotine choke and Arizmendi taps out.

Round 1 – Cortez puts Sarnavskiy on his back early. Sarnavskiy goes for a kimura and uses it to sweep, takes Cortez’s back, they scramble as Cortez turtles up. Sarnavskiy takes his back again, locks in the rear naked choke and this fight is over. It should be noted Cortez took this fight on one day’s notice.

Round 3 – They trade punches. Counter right from Zavurov. Ref halts the action to cut some loose tape off Enomoto’s glove. Restarts them. Leg kick from Zavurov. Jab, followed by a nice right from Zavurov. Enomoto lands a right in return. Body kick from Enomoto scores. Inside leg kick from Zavurov. Left from Enomoto. Nice jab from Enomoto. Another jab. He flashes an uppercut right, lands a left. Nice solid left from Zavurov. Left overhand from Zavurov, shoots for a single. Enomoto sprawls and pounds the ribs of Zavurov with one minute to go. Zavurov switches to a double and scoops Enomoto’s legs out from under him putting him on his back. Zavurov inside full guard pounding the ribs and body of Enomoto. Left punches to the face, tied up in the ropes with 10 seconds to go. Ref stands them up but time is out. PMN scores the round 10-9 for Zavurov.

Round 4 – Left jab from Enomoto. Left jab from Enomoto, again. One two, misses. Liver kick from Enomoto smacks loudly. Body shots from Enomoto. Left hand from Zavurov counters a body kick attempt. Zavurov shoots and puts Enomoto on his back. Enomoto punching off his back, pushes Zavurov off with his feet. And stands up. Right to the body from Enomoto. Zavurov looking maybe a bit tired. Dropping his hands some. Zavurov shoots, stuffed, Enomoto locks on a guillotine, they flip over and Zavurov is free and back to his feet. He shoots, sprawl from Enomoto. Zavurov puts him down and punches the body as Enomoto looks for an arm. One minute to go. Zavurov in half guard. Enomoto gets to his feet and puts Zavurov down on his back. Enomoto looks tired now. He postures up with a punch but time is out as the ref starts to stand them up. PMN scores the round 10-9 for Zavurov.