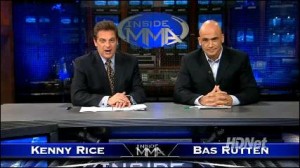 “Suga” Rashad Evans, Dan Henderson and TUF 14 featherweight tournament winner Diego Brandao joined Bas and Kenny Monday night on “Inside MMA” LIVE on HDNet. Evans discussed his upcoming fight with Phil Davis next month and Hendo talked about his UFC 139 fight with Mauricio “Shogun” Rua, which most pundits are considering one of the greatest MMA fights of all time. Brandao discussed his win over Dennis Bermudez this past weekend at the TUF 14 Finale to become the season 14 “Ultimate Fighter”.