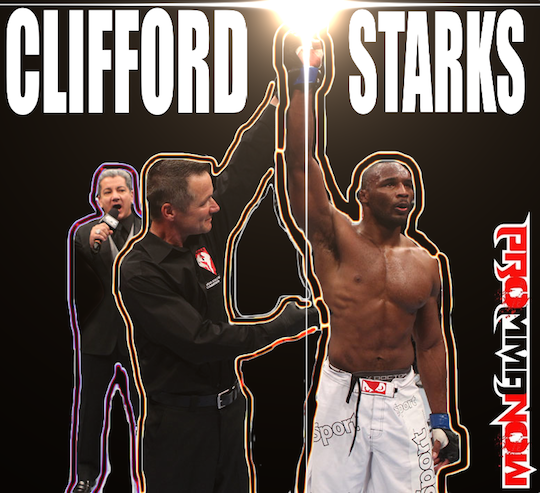 Thirty-year-old Clifford Starks has a Bachelor’s degree in kinesiology and holds an undefeated professional MMA record of 8-0. As a former Division 1 wrestler at Arizona State University, Starks was teammates with former UFC heavyweight champion Cain Velasquez.

Training out of Arizona Combat Sports in Tempe, Ariz., Starks won his first seven fights on the local circuit before making his UFC debut against fellow middleweight Dustin Jacoby at UFC 137 in October.

With both Starks and Jacoby coming into the fight undefeated, someone’s 0 had to go. Fortunately for Starks, he was able to keep his unbeaten streak alive and took  home a unanimous decision victory in that always tough first fight on the big stage.

ProMMAnow.com (www.prommanow.com) caught up with Clifford this week to talk about his UFC debut, his time spent with Velasquez at ASU and his thoughts on the former champ’s loss to Junior Dos Santos. We also found out the one person Clifford would like to fight if forced to pick his opponent and he gives us a hint on when we could see him back in the Octagon.

PRO MMA NOW: Hi Clifford, thanks for taking time to speak with us at ProMMAnow.com (www.prommanow.com). First of all congratulations on picking up a win over Dustin Jacoby in your UFC debut back in October. How did it feel to get that first UFC win under your belt?

CLIFFORD STARKS: Thank you, I appreciate it! I feel great, it is an amazing confidence booster to be able to preform well on the big stage, and now I am ready to get back in the gym and keep up with my training so that I can continue my success!

PRO MMA NOW: Now you had fought just two weeks prior to that fight and had gone the distance, winning a unanimous decision over Artenas Young. What were you doing when you got the call that the UFC wanted you to fight at UFC 137?

CLIFFORD STARKS: I was still training just was not training as hard as I would have if I knew I would be fighting. So when I got the call I was very excited to have such an opportunity presented in front of me.

PRO MMA NOW: Did you have to drop much weight or were already pretty close to 185 pounds?

CLIFFORD STARKS: No I was pretty close to weight having a fight so recently so the cut was very easy.

PRO MMA NOW: As a personal trainer and former Arizona State wrestler, you probably have this weight-cutting thing mastered anyway. What do you normally walk around at?

CLIFFORD STARKS: Yeah being educated in nutrition definitely helps out. I usually stay between 195-200 and relatively lean so my weight cuts have always been easy to do.

CLIFFORD STARKS: Cain is an amazing athlete and an all around hard worker. His work ethic is second to none. I appreciate having the opportunity to train with him because I feel he showed me what it takes to be a champion. I had no doubt in my mind that he was going to wear UFC gold when I heard he was a part of the organization.

PRO MMA NOW: How did you feel about his fight with Junior Dos Santos, was that hard to watch for you?

CLIFFORD STARKS: Well it is part of the sport, you lose some and you win some. Sometimes it just is not your day, but knowing Cain, he will be stronger from that experience and will come back as an even more dangerous force than before!

PRO MMA NOW: For those who don’t know, you train at Arizona Combat Sports with the Lally brothers. How are things going out there and who are some of your main training partners these days?

CLIFFORD STARKS: It is going very well, my game is continuing to evolve and I love the atmosphere at the gym. I think as a team we are also getting better each day. My training partners are Estevan Payan, Jeremy Larson, Zack Surdika, Jacob McClintock and Dan Charles.

PRO MMA NOW: Do you know yet when your next fight may be, any hints of when we might see you back in the Octagon?

CLIFFORD STARKS: I do not have an exact time now, but I am hearing between mid February and early March.

CLIFFORD STARKS: Wow putting me on the spot huh. Well if I would have to fight anyone I would have to go with Eric Schafer, because he is a pretty solid fighter and he has already fought two former ASU wrestlers so I would like the opportunity to get in there and mix it up with him as well.

PRO MMA NOW: We’ll definitely be looking forward to you getting back in there Clifford. And I appreciate you taking time to chat with us. Do you have any final words of wisdom for us, or do you want to thank anyone?

CLIFFORD STARKS: I would like to thank those who have supported me in this Journey, my friends, family, wife, fans, teammates, coaches and my sponsors. Without them I would not be where I am today. Thank you all so much for your support and encouragement!