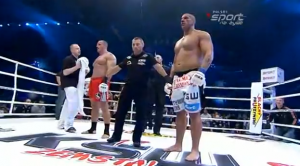 Five-time World’s Strongest Man Mariusz Pudzianowski (4-2) got his shot at revenge Saturday at “KSW 17: Revenge” in Lodz, Poland, when he took on English heavyweight James “The Colossus” Thompson (16-45, 1 NC), who bested him earlier this year with a submission win at KSW 16 back in May.

The bout ended with Pudzianowski getting the majority decision win after two full rounds. However, we here at ProMMAnow.com (www.prommanow.com) actually scored the fight a draw in our KSW 17 LIVE play-by-play, and Thompson was definitely not pleased with the decision (watch what he has to say after the bout (27:51 mark).

So check out the fight and see what you think, then sound off with your opinion in the comments section below. We want to hear your thoughts! Also, check out the KSW 17 main event fight video between Mamed Khalidov vs. Jesse Taylor.