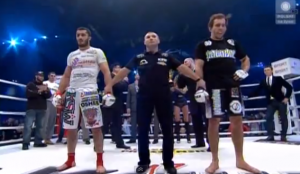 TUF 7 veteran Jesse “JT Money” Taylor (20-8) stepped up on short notice to replace former WEC middleweight champ Paulo Filho  to take on KSW middleweight champ Mamed Khalidov (24-4-2) in the “KSW 17: Revenge” main event Saturday in Lodz, Poland. It was a tall order for Taylor to take on Khalidov, who is considered one of the world’s top middleweight fighters not under the Zuffa banner.

It took Khalidov less than a round to slap a fight-ending kneebar on Taylor, causing him to tap out, and finish his fourth straight fight in the first round. Out of his 24 wins, Khalidov has finished 13 opponents by submission, 10 by knockout, letting only one of his wins go to the judges. Hopefully the UFC will scoop Khalidov up sooner rather than later.

Check out the KSW 17 full results and the Mariusz Pudzianowski vs. James Thompson fight video.