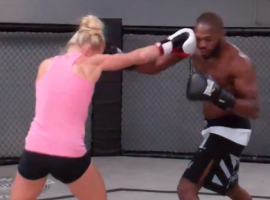 The following video shows Jones and Holm sparring during her open media workout this past Tuesday. Jones said he looks up to Holm and she pushes him as a fighter. In addition to holding boxing titles in three different divisions, Holm also holds a 2-0 record in pro MMA, having scored TKO wins over Christina Domke and Jan Finney, both in 2011.

Holm, age 30, is currently riding a 24-fight win streak, dating back to her only pro loss in 2004, when a cut under her eye caused the fight to be stopped. She holds notable wins over the likes of Chrissy Martin, Mary Jo Sanders, Mia St. John, Jane Couch, Duda Yankovich and Chevelle Hallback (twice).

Anne Sophie Mathis is the reigning the WIBA, WIBF and WBF World Welterweight Champion. She has won 24 consecutive fights, dating back 16 years to her only pro loss in her second fight. “World Dominance,” presented by Fresquez Productions, will be held Friday night, Dec. 2, at Route 66 Casino Hotel in Albuquerque, N.M. For more information about “World Dominance: Holm vs. Mathis” go to www.FresquezProductions.com.