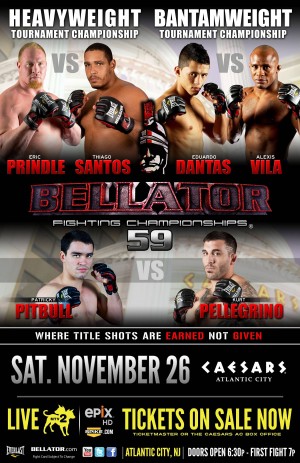 ATLANTIC CITY, N.J. — With no UFC or Strikeforce card this weekend, maybe Bellator Fighting Championships will get more of the media attention they deserve. If there are pro MMA bouts on television in North America, it will get attention, no matter how big or small the show is or how well-known the fighters are. We love our MMA here in this  continent.

Bellator 59 will close out the promotion’s fifth season this weekend with their heavyweight and bantamweight tournament finals from Caesars in Atlantic City.

Facing off in the heavyweight finals will be Brazil’s Thiago “Big Monster” Santos (10-1) and Team Death Clutch’s Eric Prindle.

Santos burst onto the Bellator scene on October 8 with a first round rear-naked choke submission over Josh Burns at Bellator 53 in what was a heavyweight tournament reserve bout.

Three weeks later at Bellator 56 Santos replaced an injured Mike Hayes against UFC vet Neil Grove in the tournament semifinals. And once again Santos walked away winning with a first round rear-naked choke submission, this time in just 38-seconds.

Prindle, age 35, qualified for the heavyweight tournament in April scoring a first round TKO over Josh Burns at Bellator 40.

In the quarterfinal round Prindle won a unanimous decision over Abe Wagner at Bellator 52 on Oct 1. Four weeks later in the semifinals at Bellator 56 Prindle knocked out Ron “The Monster” Sparks just 40-seconds into the first round.

Vila, 40, shocked the MMA world when he scored a first round knockout over Bellator featherweight champion Joe Warren in the quarterfinals in September. Vila returned in October defeating Marcos Galvao in the semifinal round via controversial split decision.

Dantas entered the season five bantamweight tournament in September scoring a first round knockout over BJJ black belt Wilson Reis at Bellator 51 in the quarterfinals. He returned in October at Bellator 55 to earn a split decision victory over Ed West in the semifinal round.

A planned welterweight match-up between Michael Costa and Lyman Good has been scrapped from the line-up after an injury forced Costa from the card.

A lightweight bout between Poland’s Marcin Held (11-2) and TUF 8 veteran Phillipe Nover (5-3-1) has been moved from the preliminary card to the MTV2 televised card as a replacement.

Also, a 175-pound catchweight bout between Portugal’s Lucas Pimenta Borges (4-0) and Ring of Combat veteran Doug Gordan (11-10) has been added to the prelims to fill the Spike.com stream.

The full Bellator 59 fight card is as follows: