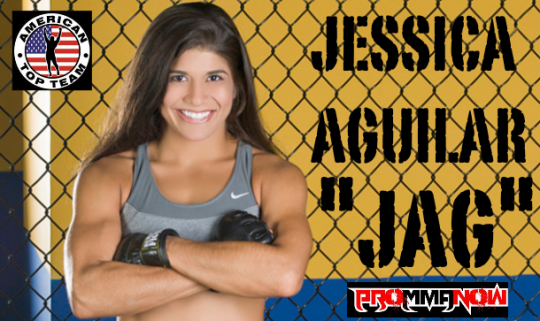 This Saturday, Nov. 19, American Top Team’s Jessica “Jag” Aguilar (11-4) will have the opportunity to possibly avenge the first loss of her career, in fact, it was the first fight of her career and it was against Lisa Ward (14-6) back in 2006.

Now, almost 6 years and a combined 29 fights later, the 29-year-old female mixed martial artists will meet again this Saturday, Nov. 19, at Bellator 58 at the Seminole Hard Rock Hotel and Casino in Hollywood, Fla.

ProMMAnow.com (www.prommanow.com) caught up with “Jag” this week to find out how much she has changed and grown since that first bout, what she thinks of Ward today as a fighter and how she plans to deal with her on Saturday.

We also discuss why she took that first fight after a mere two weeks of training, how she feels about the way Bellator is promoting women’s MMA, the challenges of managing herself as a pro MMA fighter and much more.

PRO MMA NOW: Hi Jessica, thanks for talking with us at ProMMAnow.com. You are competing this weekend at Bellator 58 against Lisa Ward. This is a rematch for you as she was actually your first pro bout back in 2006. She won by submission in the first fight, but as I understand your training was very limited back then. Can you talk a little about that, how much training you had and how you were able to fight as a professional with such limited training?

JESSICA AGUILAR: I went to a boxing gym just to stay in shape because it was close to my house. While there I took about three weeks of jiu-jitsu classes and the coach took me to a NAGA. I had no idea what to do but he said just stay on top. I won all the matches that day and a guy came up to me and asked me if I would like to fight in a cage. I asked him how much I would have to pay him. He laughed and said they would pay me. I said “sure why not” and a few weeks later I was in a match with the no. 2 girl in the world, Lisa Ward. I had no idea I was replacing the no. 1 girl in the world. I remember being in an arm bar and having no clue of what was going on but when I heard Lisa Ward’s dad scream “tear her arm off” it made me so mad I refused to tap. I fought her to almost the end of the second round with no training at all. I earned a lot of fans that day because of my heart. I will die before I tap.

PRO MMA NOW: Looking back, do you wish you had not taken that fight so soon in your career?

JESSICA AGUILAR: I learned a lot and gained a lot of fans so I have no regrets.

PRO MMA NOW: Have you kept up with Lisa’s career since then and how do you think you both have grown as fighters since that first bout?

JESSICA AGUILAR: Lisa and I compete in the same grappling organization so I have kept up with her grappling accomplishments but not so much MMA. I am a COMPLETELY different fighter now. Back then I was absolutely clueless. Now I have 50 grappling matches, have fought all over the world, and 15 MMA fights…it’s night and day. Not to mention years of training at one of the most elite academies in the world with the top coaches in the sport.

PRO MMA NOW: What do you think will be different in this bout and how do you see it playing out?

JESSICA AGUILAR: There is no comparing the two bouts, I literally had no training then. I believe it will be stand up in the beginning and then I will submit her in the third.

PRO MMA NOW: This will be your fourth fight for Bellator. They really seem to be the premiere show for women’s MMA right now. How happy are you with what they are doing and how they are promoting women’s MMA?

JESSICA AGUILAR: I am really grateful that Bjorn and Bellator have given the females the opportunity to showcase our skills on a national level. The exposure is great.

PRO MMA NOW: I was reading your bio at www.jessicaaguilar.com and it talked about how your mother was not a big fan of you being involved with competitive sports. How is that relationship with your Mom now, and after seeing you compete in MMA for so many years now, has she embraced it or has her attitude changed at all and has she ever been to watch you fight?

JESSICA AGUILAR: She is terrified to watch me fight. I am her only daughter. She lost my Dad when I was 6-years-old and then my older brother too, so she is very nervous about me fighting.

PRO MMA NOW: Are you still doing any acting and is that something you are still interested in?

JESSICA AGUILAR: I love acting and plan on going back to it one of these days. I was on the show “Dexter” briefly before becoming an MMA fighter.

PRO MMA NOW: Can you talk a little about the challenges of managing yourself and why it has been so difficult to find the right manager to work with?

JESSICA AGUILAR:I have not been able to find a manager who can devote enough time to me because the females still don’t get big purses. If there is no financial incentive they won’t put the time in. It’s tough juggling everything but I have done okay thus far.

JESSICA AGUILAR: I still have a long way to go in my fight career, I definitely want to be Bellator 115 Champion. After fighting I would like to have a business of my own, possibly a gym . My best friend owns Boca Tanning and they are expanding all over the nation, I may help her and do something with marketing for them.

PRO MMA NOW: Thanks so much Jessica. Best of luck to you on Saturday. Any final words or would you like to thank anyone?

JESSICA AGUILAR: Smile and believe. Once again thank you so much for the support. I appreciate it very much.

2 thoughts on “Bellator 58 spotlight: An interview with Jessica “Jag” Aguilar”