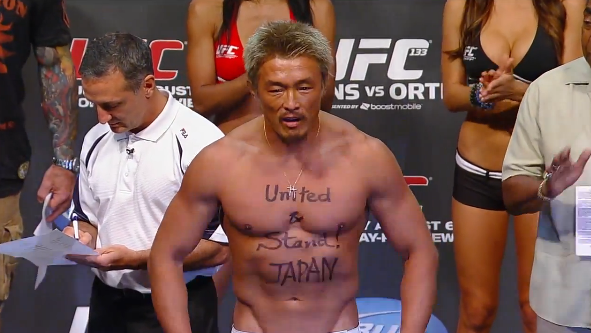 The UFC has officially announced a welterweight contest between former Strikeforce champion Jake Shields and Yoshihiro Akiyama. The bout will be part of UFC 144, which takes place Feb. 26 at the Saitama Super Arena outside of Tokyo.

Akiyama will drop to welterweight after going 1-3 inside the Octagon at 185 pounds. The Japanese-Korean fighter will fight in Japan for the first time since submitting Masanori Tonooka at Dream 6 in 2008. Between 2004-2009, Akiyama built an impressive 12-1 record and held a spot in many middleweight rankings. However, since defeating Alan Belcher in his UFC debut, he has last three-straight fights.

For five years, Shields did not lose a fight. Now he is coming off back-to-back losses. At UFC 129, he came up short in title fight against Georges St. Pierre. In his return fight, Jake Ellenberger stunned him and finished him in the first round. During his undefeated run, Shields captured the Elite XC welterweight title and the Strikeforce middleweight title. Along the way, he bested Paul Daley, Jason “Mayhem” Miller and Dan Henderson.

For UFC 114, the world’s biggest MMA promotion will return to Japan for the first time since UFC 29 in 2000. In the main event, Frankie Edgar will defend his lightweight title against former WEC champion Benson Henderson. UFC President Dana White has always reveal via his video blog that Quinton “Rampage” Jackson will fight on the card.