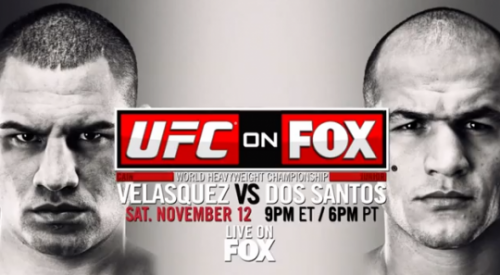 Take a breath. Step back away from the ledge. The UFC on FOX show delivered the goods even though the one televised fight only lasted 64 seconds. I saw all kinds of outlandish statements on my twitter timeline last night talking about how the quick ending would be a disaster for the sport, etc.

I would be foolish to not state that things could have gone a bit better had the fight lasted at least one round, but there are many more positives to come out of the event than negatives so that’s the main point to remember.

The final tally will not be available until Monday or so because it appears adjustments must be made in regards to viewership because the fight was over so quickly. However, it appears that the fight is right in the ballpark of 6 million or so viewers that I said it would do earlier in the week.  I wrote:

I think the show will do close to 6 million viewers, give or take a little.

The are multiple reports of 5.7 million viewers as of today, but the initial numbers were 4.64 million. However,  these are not finalized numbers so they could change. So let’s talk about the positives:

Those are the three main things that one should be looking for from the event. We already knew that there was only going to be one fight broadcast, so there’s no sense in complaining about Ben Henderson vs. Clay Guida not being aired.

I think we can also take some solace in that the main event actually took place after hearing rampant rumors that both fighters were pretty banged up going into the fight. Just imagine if they would have had to cancel the fight between Junior dos Santos and Cain Velasquez 2 weeks out from the fight after only promoting THAT fight for 2 months? Yep, I’d say things went pretty well all things being considered.

Finally, this whole UFC on FOX deal is a long term process. It’s not about how many people the UFC and FOX can convert into UFC/MMA fans after one show. Most adults have probably already made up their mind if they are a fan or not for the most part.

The real key to this FOX deal is seeing how many people that are easily influenced (younger demographic) can be converted into MMA fans. Those people will be the ones that will become the core fan base in the next decade and will dictate the number of PPV buys the UFC gets.