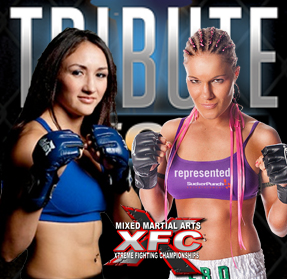 A women’s MMA co-main event bout between Carla Esparza (5-2) and Felice “Lil Bulldog” Herrig (5-3) has been added to “XFC 15: Tribute” on Friday, Dec. 2nd, at the St. Pete Times Forum in Tampa, Fla. The event will air LIVE on HDNet.

“I am really excited about the Esparza vs. Herrig being our co-main event. The XFC is going to shine a spotlight on Women’s MMA and these two women are the cream of the crop. This fight will be a classic striker vs. grappler match-up. Felice is one of the top kickboxers in the world and Esparza is a two-time All-American wrestler. I’m really looking forward to seeing how Felice does on the ground. I know she has submission wins under her belt and the guys at Team Curran have made her very well rounded. But you can’t forget about Carla. She is a great wrestler and her striking has gotten much better. I think she will be able to stand with Felice if it doesn’t go to the ground.”

The 24-year-old Esparza has fought twice so far this year, winning one and losing one. She scored a first round submission win over Yadira Anzaldua in April at Evolution Combat. And in her most recent bout she dropped a split decision to American Top Team’s Jessica Aguilar at Bellator 46 in June.

Herrig, 27, has fought three times so far this year. After dropping a decision to Barb Honchak in January, she rebounded with a first round TKO win over Andrea Miller at Chicago Cagefighting Championship in March and a unanimous decision win over Nicdali Rivera-Calanoc at XFO 39 in May.