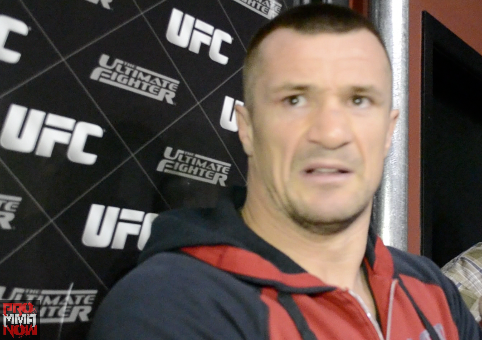 ProMMAnow.com (www.prommanow.com) was on the scene at the TUF Training Center Wednesday in Las Vegas for the UFC 137 open workouts. Following the workouts, Mirko “Cro Cop” Filipovic gave a few minutes of his time to the media for a Q&A.

Cro Cop (27-9-2, 1 NC), who will square off with TUF 10 winner Roy “Big Country” Nelson on Saturday, said the heavyweight fighter is actually too heavy for his height and feels conditioning is his biggest problem.

Although Nelson (15-6) is a highly respected BJJ black belt, Cro Cop said he is not worried much about his ground game and people forget that he himself has been training jiu-jitsu for 10 years.

Cro Cop admits Nelson is dangerous, but also said, “People in my country will say, ‘If you beat him, you beat a fat guy’, and if you lost to him they start laughing to me, ‘You lost against him’, but he’s a super dangerous guy who can knock out anyone. Some people might be tricked by his body, but he’s a dangerous guy.”

Cro Cop believes because he is hard to take down Nelson is going to want to keep the fight standing or at least push him against the cage. When asked what his motivation is at this point in his career, the Croatian said, although he would survive, a third straight loss would be disastrous.

The former Pride Open-Weight Grand Prix champion also talked about life after fighting, which could be coming very soon. His plans for when he finally hangs up the gloves once and for all is to concentrate on raising his two sons. He said it takes a lot of time and energy to raise kids today and to make a man of them and does not want them to be lazy.

Also, Cro Cop stated that he is not interested in making a movie career or anything like that after fighting, for him, he just wants he and his family to be happy. He hopes his children do not want to be fighters, but if they want to, he will support them just as his parents did for him.

Be sure to check out more ProMMAnow.com exclusive UFC 137 coverage.

24 thoughts on “Cro Cop on Nelson: “He’s definitely too heavy for his height and conditioning is his biggest problem””