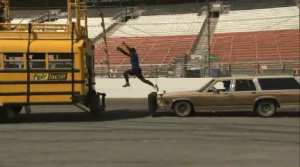 The original Fear Factor ran for six season on NBC from 2001-2006. It was one of the forerunners of reality television and on Dec. 12 they are reviving the show with original host Joe Rogan, who of course also serves as color commentator for the Ultimate Fighting Championship. Rogan has been saying on his podcast recently that the new Fear Factor is bigger, crazier, sicker and way more over the top than the original show. In fact, he said he can’t even believe they were able to get away with some of the stunts they pull on this upcoming season. Check out the following trailer and you will understand exactly what he is talking about.