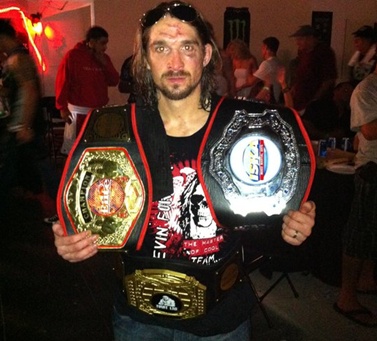 North Carolina lightweight Kevin Forant knows all about hard work. After starting his amateur career with a respectable record of (4-2), Forant went on to rattle off six straight wins finishing all of those opponents and avenging one of those defeats. Forant made his professional debut this past September winning via TKO in the second round. He accomplished all of that while working a full time job and being a full time time as well.

However, on November 5th, he’ll be facing arguably his toughest opponent yet in Team R.O.C. fighter Jordan Rinaldi at the Imperial Fighting II event in Concord, NC. This winner of this fight could arguably lay claim to the best lightweight MMA fighter in North and South Carolina.

Forant was gracious enough to spend some time with Pro MMA Now to talk about his upcoming fight, how he got his nickname, and much much more.

Pro MMA Now-Hey Kevin, how’s everything going and how is your body holding up from training camp for this upcoming fight with Jordan Rinaldi?

Kevin Forant-Now, I feel great. This is my 3rd fight in 4 months. I have been pretty much been training nonstop the whole time. After my last fight I was starting to wear down just a bit, so I took a few consecutive days off of training. It was is exactly what I needed. I feel completely rejuvenated.

Pro MMA Now-Excellent. You have been on an absolute tear winning an incredible 6 fights in 2011 alone, finishing all of those opponents. Talk us through fighting so often. Did you have a set gameplan for 2011 as you were eyeing becoming a professional, or do simply just like to fight as often as possible?

Kevin Forant-The plan in 2011 was to challenge my self as much as possible and fight the best amateurs we can find. In June we decided that I was going to fight 1 more ammy fight then turn pro. I was offered a title shot vs Jason Lineberger and we thought that would be a perfect test before turning pro.

Pro MMA Now-You are coming off an impressive pro debut win this past September. You’ll be facing highly regarded Jordan Rinaldi at the Imperial Fights II event on November 5th, in Concord, NC. You agreed to take this fight when Jordan’s original opponent had to pull out. Give us your thoughts on why you took the fight and also give us your thoughts on Rinaldi as an opponent and what he brings to the table?

Kevin Forant-Jordan is highly regarded. He is well rounded. He has shown to have heavy hands and is a purple belt in BJJ. I took the fight because I like to challenge my self. I want to fight guys that make me a better fighter.

Pro MMA Now-Now, he has been out of action coming into this fight after having knee surgery. Do you expect that time away from the cage to play to your advantage?

Kevin Forant-I haven’t put much thought into it. I expect Jordan to be well prepared for this fight.

Pro MMA Now-I know you train primarily with Team Hayastan-IMB. Are you doing anything different for this bout and who are some of the notables you are working with leading up to this fight?

Kevin Forant–Most of my training has been right here at Hayastan-IMB and Dyme Boxing with the usual guys, Tony Tan, Keith Richardson, Brad Roof. I did spend a little time in Tennessee and got to work with Dustin Walden, Nate Jolly, Ian Boxhorn and a few others.

Pro MMA Now-I don’t know if you read his interview but Rinaldi said he’s going to finish you in the second round via TKO. What’s your response to that statement even though you’ve never been finished in your career?

Kevin Forant-I think I heard that once or twice before from past opponents. If he is looking for a finish he better try to get it in the 1st because he isn’t going to be able to keep my pace in the 2nd or 3rd rounds.

Pro MMA Now-You do fight at a torrid pace. Both of you guys have fought in the Charlotte area with many of your fights taking place there going back to your amateur days. I know you had a huge crowd there supporting you in your last bout. Does having all those supporters there provide any added pressure for you to perform well?

Kevin Forant-I never feel any pressure for any of my fights. I go into each fight knowing that I did everything I can to prepare for the fight.

Pro MMA Now-Let’s switch gears for a moment. You are known as the “Master of Cool.” How’d that nickname come about?  Is it the hair or what man…haha?

Kevin Forant-I get this a lot. One of the local promoters started introducing me as “The Master of Cool” on my way to the cage. I thought it was cheesy at first but I was down in Myrtle Beach for a fight and after the weigh in we had a stare down for the public. This guy, the hometown guy, was real animated. He was really trying to get in my face and intimidate me.  I stood there for the stare down and some one said “that isn’t going to work against “The Master of Cool””. From there it just started building momentum, so I just went with it. It is fitting, it really describes my personality. I am real relaxed and laid back.

Pro MMA Now-Well..”Cool”..haha..What does Kevin Forant do when not training in MMA? Since you are a laid back type of guy do you like to stay home or someone that likes to be amongst friends and hanging out?

Kevin Forant-This guy doesn’t have time to do anything. I work a full time job and basically train full time as well. Monday through Friday I typically leave the house 7:30am to go to work then get home from they gym 11:00pm or later. I am back in the gym Saturday from 11-3. After 4 on Saturdays and all day Sundays is family time. I have a wife and 2 kids ages 3 and almost 2.

Pro MMA Now-Oh man…that’s quite a schedule and makes what you have accomplished thus far even more impressive. Ok..winding down…and I always ask this question leading up to a fight. What’s your prediction for November 5th with you and Rinaldi?

Kevin Forant-My prediction is win in 3rd round ground and pound.

Pro MMA Now-Do you have anyone in particular or sponsors that you’d like to thank?