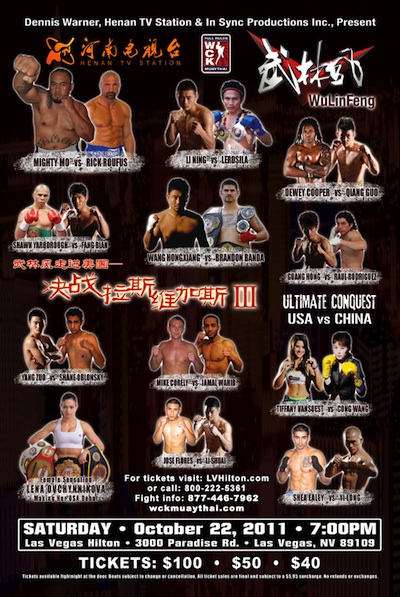 Las Vegas, NV – October 13, 2011 – For the third consecutive year, Dennis Warner and In Sync Productions, Inc. has partnered with Henan TV Network and the WulinFeng fight group to bring the best martial arts fighters from China to the U.S. to face the WCK fight team.  The main event features a Heavyweight World Title bout between K-1 legend Rick “The Jet” Roufus and top K-1 contender Siala-Mou “Mighty Mo” Siliga.” The WCK event will take place on Saturday, October 22 at the Las Vegas Hilton.

Rick “The Jet” Roufus and ‘Mighty Mo” Siliga are both iconic world class fighters that are well-known and respected in the K-1 arena. Their dynamic and aggressive fight styles helped propel the K-1 USA fight shows to must see events.  Although both legendary fighters are known for dominating the K-1 world, they have never faced each other, until now, making this one of the most highly anticipated K-1 fights in the U.S this year! …and this is just one of many exciting match-ups on the card!

Rick “The Jet” Roufus holds a K-1 record of 63-9-1 (42 wins by way of knockout) and is one of the most revered and feared kick boxer’s in the United States.  The six time full contact kick-boxing world champion claimed two different weight class titles under the IKF, (International Kickboxing Federation.) Although Roufus is best known for his unrivaled skills in the K-1 arena, he has also competed in boxing and the mixed martial arts arena. As a boxer, Roufus clinched the WBC’s Continental Americas Cruiserweight title.

His opponent “Mighty Mo”, with a K-1 record of 16-5 (12 wins by way of knock out), is also well known and respected in the K-1 arena. ‘Mighty Mo’ became the K-1 World Grand Prix champion in 2004 at the Las Vegas II event and in 2001 claimed the K-1 World Grand Prix tournament championship title. Like Roufus, “Mighty Mo”has also competed in boxing and in the mixed martial arts arena. On Saturday, October 22, the two K-1 Legends will collide, and only one will emerge as the WCK World Heavyweight Champion.  Fight fans will not want to miss this iconic K-1 battle!

The WCK is looking to turn the tables on the competition in 2011, having been defeated by Wulinfeng 5-3-1 at the Harrah’s Las Vegas event last year.  This year WCK is Confident that they have an edge. In addition to having K-1 legend, Rick “The Jet” Roufus, on the team, the newly appointed team captain, Dewey Cooper, plans to lead the WCK team to victory. Cooper has been to China as a fighter and coach many times for the WCK and he will provide tremendous insight into the abilities of China’s fight team.  Fans can expect nothing less than a dominant performance.

According to promoter Dennis Warner, “This year’s WCK card is stacked with must see fights. Words cannot express how thrilled we are to have K-1 rivals Rick “The Jet” Roufus and “Mighty Mo” headline the event. This year’s event will also feature many international superstars including Mr. Lightening Lerdsilla of Thailand, who will square off against Li Ning of China, Ukrainian female sensation Lena Ovchynnikova and many others.”

Warner concluded with, “The Vegas fight scene is highly competitive and fight fans can select from any number of fight events …but I can assure you, THIS is the event to see! From the historic main event K-1 bout between Roufus and “Mighty Mo”, to female and team fighting, fans can expect nothing less than non-stop fight action of epic proportions!”

The 2011 WCK event will also celebrate the organization’s 10th year anniversary.  The first WCK event was held in Las Vegas at The Palms Hotel & Casino in December of 2001 and was the first ever “ full rules” Muay Thai fight event in  Nevada’s history.

Ticket prices for the show are $100 ringside, $50 stage and $40 general.  To purchase tickets, please log on to www.lvhilton.com or call 1-800-222-5361.  There will be a special hotel rate for fight fans to stay at the Las Vegas Hilton for the weekend.  Fans can go to www.wckmuaythai.com or the WCK Facebook page for more information.