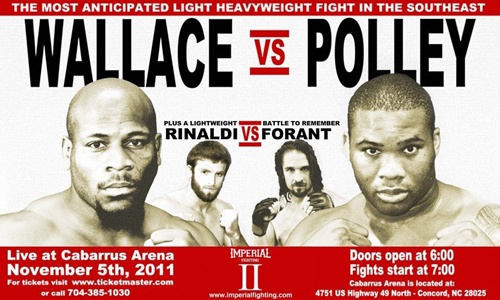 Tim McTee will be invading Concord, NC, on November 5th with his Imperial Fighting II: Wallace vs. Polley event. The Imperial promotion will be looking to keep the momentum going after a very successful promotional debut in September which took place at the historic Grady Cole Center in Charlotte, NC.

This is a stacked event with 3 professional fights and 7 amateur bouts to round out the card. The main event will feature UFC veteran and Pro MMA Now #1 ranked light heavyweight Rodney Wallace(11-4) as he’ll be taking on TUF 13 coaching standout Lew Polley(10-4).

The co-main event  is one of the most anticipated lightweight bouts in recent memory with undefeated and highly ranked Jordan Rinaldi(4-0) taking on  highly regarded Kevin Forant(1-0) in a fight that will likely determine who is the #1 lightweight in the Carolina’s.

Highly regarded Keith Richardson(6-2) will be looking to -keep his momentum going as he’ll take on Brandon Bender(5-1) in a featherweight bout that will round out the professional fights. The event will take place at the Cabarrus Arena and Events Center beginning at 7pm with the doors opening at 6pm, and you can get your tickets online right here. The entire fight card can be found below: