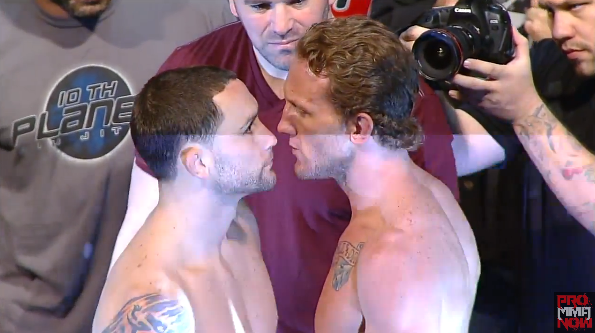 This past weekend Frankie Edgar and Gray Maynard fought for the third time at UFC 136. Edgar won the bout via fourth round TKO after being hurt in the first round by Maynard in what should have been a  10-8 round on the judges score cards. The second bout was almost identical in that Maynard hurt Edgar early in the first round only to have Edgar come back strong in the latter rounds with the bout ending in a draw. Of course, the first fight between these two guys took place all the way back in 2008 with Maynard winning that bout via unanimous decision.

So these guys have fought three times with both winning one fight. Why wouldn’t there be a fourth fight since the last two bouts have been as competitive as they come?

UFC president Dana White said the two would not fight for a fourth time regardless of the outcome prior to the fight taking place this past weekend. He basically stated that the lightweight division was loaded with talent and that there are other fights that can be made in the division. Also, he stated that both fighters would probably want to move on to new opponents.

I don’t disagree with him in that the division has been put on hold for these two guys to fight, but that was because both fighters sustained injuries which pushed the fight back later than first anticipated. It would not be out of this world for Maynard to beat the next 2-3 contenders in the division and be back in line for a title shot with Edgar still holding the title. So there wouldn’t be a fourth fight between those two with all of the fights between them being ultra competitive? Not to mention that the series is still even at one win between the two fighters since the second bout ended in a draw?

I understand that neither guy is a bonafide superstar PPV wise if we are talking money, but if you believe in the best fighting the best then a fourth fight(at some point) should happen. Not to mention the UFC was going to do Tito Ortiz vs. Chuck Liddell III last year. Ortiz was destroyed by Liddell in the first two fights, so what was the third fight going to be about? Ortiz destroyed Ken Shamrock twice with the second fight ending in a controversial early stoppage(not really), so the UFC had them to fight for a third time in what was a one sided fight. I could understand if Maynard got beat up like Jon Fitch did against Georges St. Pierre and the bout was not competitive. However, Maynard and Edgar have given us two great fights this year and a fourth is worthy in my opinion.

If the UFC is serious about the best fighting the best shouldn’t there be a fourth fight between these two if the scenario presents itself? Wouldn’t you watch if you were a fan?

2 thoughts on “Why shouldn’t Frankie Edgar and Gray Maynard fight a fourth time in the future?”