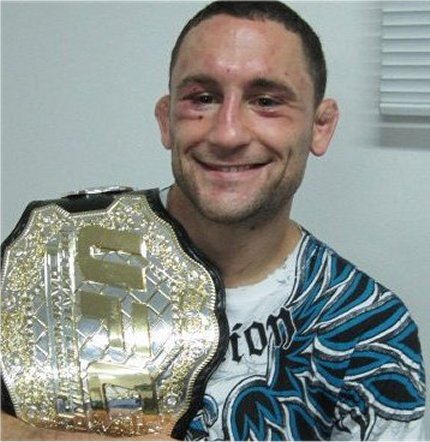 Frankie Edgar came back from a nearly disastrous first round yet again to win his “Knockout of the Night” award. Just like in their previous meeting, Edgar was badly hurt in the first stanza, but the champion proved that his heart is immeasurable. Edgar came back to win the next two rounds, and then staggered Maynard with a flush uppercut in the fourth stanza. Maynard stumbled backward, but Edgar pounced, firing off a brutal right hook that rocked Maynard. Edgar continued to pour it on, landing another big right hand that dropped Maynard, and then added few more finishing strikes to put a definitive end to his rivalry with Maynard– at least for now.

Joe Lauzon was given little chance to defeat the streaking Melvin Guillard who promised to win by KO before the fight. Guillard came out swinging, but it was a counter left hand from Lauzon that proved to be the beginning of the end for Guillard. As Guillard hit the mat and tried to shake out the cobwebs, Lauzon took his back and applied a tight rear naked choke that forced the tap within seconds. It was a stunning finish that happened in under a minute, and it earned Lauzon “Submission of the Night” honors.

Nam Phan and Leonard Garcia went at it once again, putting on a show for the Houston crowd by throwing caution to the wind in their “Fight of the Night” performance. Phan ensured that he would get the nod this time around, landing the cleaner, crisper strikes throughout the bout. Garcia had his moments, and had Phan hurt with some wild, looping punches that have become his trademark in the Octagon, but in the end it was Phan that would get the unanimous decision with scores of 29-28 across the board.