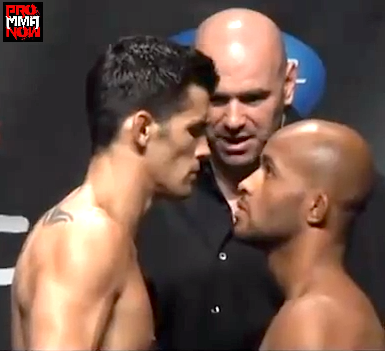 WASHINGTON, D.C. – Friday’s UFC Live: Cruz vs. Johnson (UFC on Versus 6) fighter weigh-ins took place at the D.C. Armory. Saturday’s fight card, which will air LIVE on Facebook and Versus, takes place at the nearby Verizon Center.

Only late replacement Byron Bloodworth missed weight. The bantamweight fighter who only signed on for the bout this week came in at 138-pounds, two pounds over the 136-pound bantamweight non-title fight limit. He has two hours to drop the extra weight.

Headliners, Dominick Cruz and Demetrious Johnson, both hit the bantamweight mark at 135-pounds even. Cruz will attempt to defend his belt for the second time since transitioning to the UFC from the WEC earlier this year.

The complete UFC on Versus 6 weigh-in results are as follows: