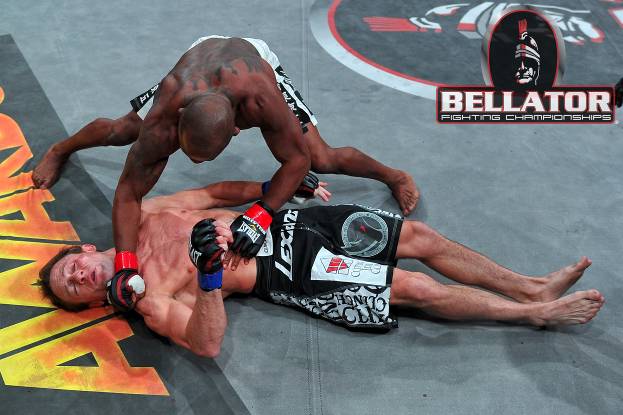 CANTON, Ohio (September 24, 2011) – For the first time in his Bellator career, Joe Warren not only lost a fight but was finished as former Cuban Olympian Alexis Vila put an exclamation mark on the evening with a 64-second knockout victory over the self-proclaimed “Baddest Man on the Planet” in the main event at Bellator 51 LIVE from the Canton Civic Center on MTV2 and in commercial free HD on EPIX.

“Just spectacular performances by our 135ers,” said Bellator Chairman & CEO Bjorn Rebney. “These four semi-finalists are some of the best in the world. Vila and Dantas’ knockouts are two of the greatest knockouts I’ve seen all year. This division is stacked and I cannot wait for October 22nd in Arizona. These semi’s will be magic.”

Vila had his raised high inside the Canton Civic Center after putting Warren to sleep with a fierce left hook after he rocked the featherweight champion with a powerful right hand on the previous exchange. The win sent a statement to the remaining competitors vying for Bellator Bantamweight Champion Zack Makovsky’s title, that Vila isn’t just some Olympic wrestler – he’s a 135-pound knockout artist.

“There’s nobody that can stop me from becoming the next Bellator Bantamweight World Champion,” Vila said. “I feel like the belt is already mine. I just have to beat up a few guys before I get to take it home.”
Those guys he’s referring too are Marcos Galvao, Eduardo Dantas and tournament veteran Ed West, who all walked away with wins at Bellator 51 in Canton.

West outlasted Luis Nogueira who only tried to tie him up in a clinch for most the fight. Once West kept his distance and fought his fight from the outside he was able to pick apart Nogueira with dazzling kicks and a superior jab-cross combination.

Fighting not only to advance to the semis but also looking for a chance at redemption against Warren were Galvao and former WEC veteran Chase Beebe. The first round of this fight was extremely back and forth with both fighters escaping multiple submissions and getting their fair share of punches in, but as the fight progressed Galvao gained the edge on the ground and was able box his way to a victory in the third and final round. Cardio seemed to be a big factor in this fight and Galvao walked away with the win by split decision.

Wilson Reis was eliminated from the tournament once again in his first attempt at 135 pounds, but big things were expected from his opponent, Eduardo Dantas, when he showed up with world champion Jose Aldo and Marlon Sandro in his corner. Dantas earned a knockout as exciting as Vila’s when he capitalized on a kick caught by Reis in the opening round. Reis wouldn’t let go of the leg at first and looked to set up a takedown, but when Dantas took his leg back and Reis began to retreat to get outside his striking distance, Dantas sprinted toward him and laid him out flat with a knockout by flying knee.