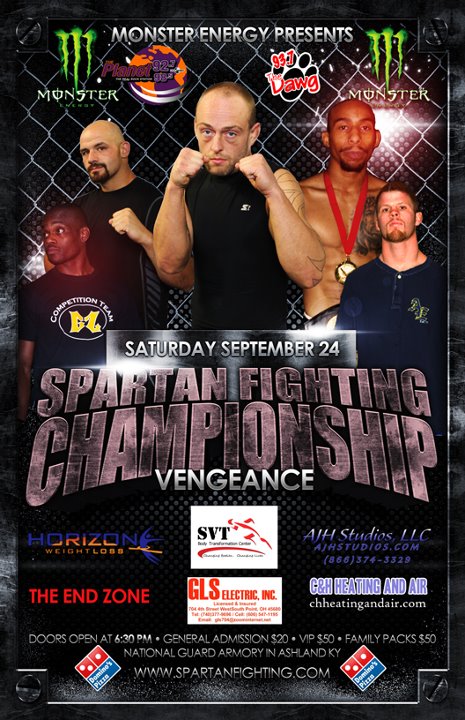 It has been just over four months since Spartan Fighting Championship wowed the MMA fans of Ashland, Ky. SFC is set to return to Ashland for its ninth event with some great match-ups and great deals for the fans.

The amateur card is highlighted by two great fights. Local fighter Eric Jarvis (5-2) looks to avenge a loss against Travis Ross (2-0) and Joey Donahew of UNICA MMA (5-3) takes on Ronnie Jordan of Vision MMA (4-2) for the vacant SFC Bantamweight Title. Also, Chris “Smoke” Hale, Jared Walters and many more of the area’s top local talent will also be on the card.

Fans with V.I.P. tickets will get the luxury of having a pre-event party at a local spot and be shuttled to the Armory for the fights. Also Spartan offers a family  ticket package that allows the entire family to enjoy the fights for a discounted price. Doors open at 7 p.m. with fights starting at 8 p.m. sharp.

Here is a look at the fight card, subject to change: