Show 109 and the booth is still blazing from last week’s show…. Don’t worry though we didn’t report the blaze, we did what you would expect WE BROUGHT GASOLINE! Time to keep this fire going and drop another hot line up on you! This show just might put the barber shop out of business due to damage!

Alexis Vila in my not so humble opinion could be the best wrestler in the Bellator promotion. Not only is the man a two time world champion, but he is also a Bronze Medalist at the 1996 Olympics, I trust you see the basis for my opinion now.

Our next guest is scrapping at Bellator as well and this man has a ground game that is dangerous for anyone. A thing that Eduardo Dantas will have to deal with at Bellator 51, when he faces Wilson Reis.

Wilson is bringing in a record of 12 wins and three losses. Wilson is a beast on the mat when the fight hits the ground as his five submission wins will let you know. Wilson was the EliteXC 140-pound Champ and is looking to make a run in Bellator for a shot at gold.

I mention Wilson’s ground game with a ton of respect, in 2004, Reis won the Brazilian Jiu Jitsu World Championships as a Brown Belt. We will talk to Wilson about being back in Bellator for another fight, where he wants to take his MMA game (including his BJJ and MMA game). We will talk to Wilson also about what he wants to do when he is done fighting and you know the Girl will be talking the ground game. 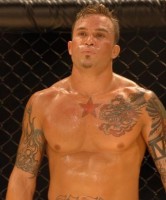 Our second hour gets razor sharp right off the bat. “Razor” Rob McCullough is dropping in on the shop and he’s the one bringing the blades! It’s been a hot one since we’ve had Rob on the show and I can’t wait to talk to him about his upcoming fight.

Rob is set to fight at Dream 17 against renowned submission specialist Shinya Aoki. This is a huge fight for Rob and could get him back in any picture he wants. I can’t wait to talk to him about how his clothing line is coming along, and how this fight came about.

Rob is a guy who has been at the peak of the sport and now is making his way back there. Coming off a quick exit in the Bellator lightweight tournament, Rob is ready to do work and come home from the land of the rising sun with another win on his record.

This is just the tip of the iceberg on what’s going down with Rob, we still got the family and whatever else this Nucka has gotten into since the last go around; tune in to catch up!

Last but not least we got my brother from another mother, the man I just might sock you in your Pallet over, and the man I stand behind will be fighting for the HW Belt before you know it, Travis “Hapa” Browne is walking through the door and you best hope you aren’t in the man’s seat.

Coming off a huge KO of Stefan Struve, LIKE I SAID WOULD HAPPEN!!! HI HATERSSS!!! Hapa is looking to continue his winning ways with a fight against Rob Broughton at UFC 135. We will talk to Hapa about switching up his camp for this fight, training with new kats and teammates, and adjusting to the hotter weather.

When and Where to Listen
Make sure to tune into the show on our new home at ProMMAnow.com (show page: https://prommanow.com/index.php/fisttacuff-radio/). The show starts at it’s regular time Sunday at 7:30 p.m. PST / 10:30 p.m. EST. Phone lines will be open for listeners and you can always call 347-637-3023.