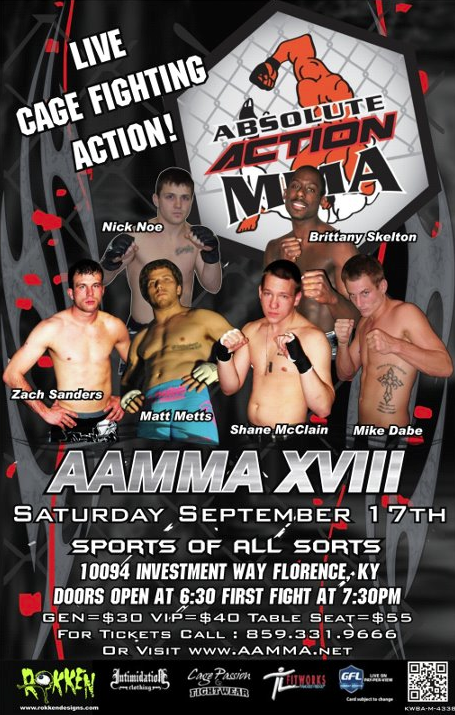 Another event is in the books as Absolute Action MMA finishes up their 18th show Saturday night with some great action. New champions were crowned and some great professional MMA was on display.

Everything took place at the confines of a great venue in Sports of All Sorts in Florence, Ky. Zach Sanders and Issac Steele got wins on the professional side as Oleg Nesenchuk captured his first title defeating Luke Hoffman after a doctor stoppage following Round 1.

Brittany Skelton wowed the audience with a head kick to defeat Rob Covington just 16 seconds into the first round.

Absolute Action MMA returns to Sports of All Sorts on Friday October 14th. For more information be sure to check out http://www.aamma.net for updates. Coverage courtesy of Juan Valle, Bluegrass MMA.

Round 1 – Eric representing Impact Martial Arts. Tyson looking for his first win as a professional. Erick with the nice kick to the head, landing some toes across the face of Tyson. Tyson clinches up, Erick throwing some punches. Tyson looks like he is looking for a takedown, but Eric is doing a good job of defending. Eric dropping punches to Tysons head, ref warns to watch the back of the head. Fighters are up against the cage with Tyson working with the under hooks. Tyson throwing some knees to the legs of Eric in between the attempts to take the fight to the ground. Eric working and getting the under hooks. Eric with some foot stomps. Ref breaks up the action . Tyson with a kick to the mid-section than again. Eric returns the favor with a kick of his own. Eric than goes for a takedown of his own, Tyson defends and has a weak guillotine check attempt. Fighters break it off, exchange some punches with Tyson getting the better of the exchange. Tyson shoot for the take down and gets it. Fight than ends as soon as they land. Tough round to call.

Round 2 – begins with both fighters exchanging leg kicks and attempts. Tyson appears to be winning the exchange of the leg kicks so far. Eric smiles as one of the kicks land to his knee. Tyson lands a superman punch than follows up with a nice hook. Than lands a kick to the mid-section. Tyson just throwing the leg kicks at will and Eric is doing his bet to defend but majority of the kicks are landing. Tyson lands a hard and nice kick and you can see Eric winching in pain as it lands. Eric breathing heavy is doing his best to avoid the kicks at all cost. Tyson lands a nice inside kick. Tyson attempts another kick and Eric lands a nice exchange of punches. Tyson rebuttals the exchange with a kick to the mid-section. Fighters circling each other as the bell rings signaling the end of round 2.

Round 3 –  beings with Tyson getting the take down and landing in side-control. Tyson is working to get side control, but Eric uses Tyson’s momentum to end up on top than stands up. Eric with his hands down breathing heavy throws a kick knocking Tyson off balance which results in slipping and falling to the ground. Eric rushes in but Tyson is able to get back to his feet. Fighters are clinched up against the cage but not before Eric can land some punches. Tyson’s nose is bleeding from that last exchange. Eric appears to be completely out of gas as he rests his lands on top of his head. Fighters circling than Tyson lands a heavy superman punch but not much damage was done. Fighters clinched up against the cage, Tyson in control is throwing some knees to the leg than lands a heavy hook. Fighters have one last exchange as the bell rings. Fight is going to the judges scorecard

Winner: Judge 1 and 2 score it 30-27 and Judge 3 has it 29-28 for a unanimous decision for Tyson Triplett.
Tyson Triplett gets his first victory as a professional and improves his record to 1-5.

Round 1 – Isaac Steel representing JG Academy. Joel Miller representing Fusion MMA. Both Fighters making their Pro debut this evening. The round begins with both fighters feeling each other out. Steel lands a inside kick followed up by a shot which results in a take down. Isaac has side-control than stands up and throws some punches, one lands. Jumps back into side-control briefly than works for and gets full mount. Steel throws some shoulder shots to Millers face. Steel is throwing and landing down on Millers face. Miller flips to his back and Steel working for position. Miller turns back to his back, resulting in Steel getting side-control and goes for a arm triangle has it in deep. Miller taps with literally 3 seconds left in the first round.

Winner: Steel via Submission in 4:57 seconds in the first round via Arm Triangle.
Steel improves to 1-0 as a professional.

Round 1 – JR Hines representing Slaughterhouse MMA. Zach Sanders representing Reaction MMA. He also wins Song of the Night, Katy Perry “Last Friday Night”. Round one opens up with Sanders throwing a leg kick, than a jab followed up with a take down attempt. Hines has a guillotine but it doesn’t appear to be in deep. Sanders still going for the take down picks up Hines and slams him to the ground and lands in side-control throwing down punches unanswered. After a few land Hines taps out.

Winner: Zach Sanders via TKO (punches) in 1:37 into round one.

Round 1 – This fight is for the vacant 145lb title. Oleg Nesenchuck representing Reaction MMA. Luke Hoffman representing Apocalypse MMA. This is the Main Event of the evening. Round one opens up with Hoffman throwing a 1-2 combo and Oleg shoots for the takedown and gets it. Oleg carries Luke to his corner to get advice. Oleg in guard position is looking for an opening. Hoffman is cut from punches that are landing. Cut right above the left eye. Oleg is throwing heavy punches and picking them carefully. Oleg landed four punches to the face all clean shots. Now has side-control, stands up and throws heavy and unanswered punches. Luke is cut real bad right above his left eye. The round ends. The doctor is in the cage taking a look at the eye. I wouldn’t be surprised if he calls it.

The doctor stops the fight due to the cut. The cut was deep.