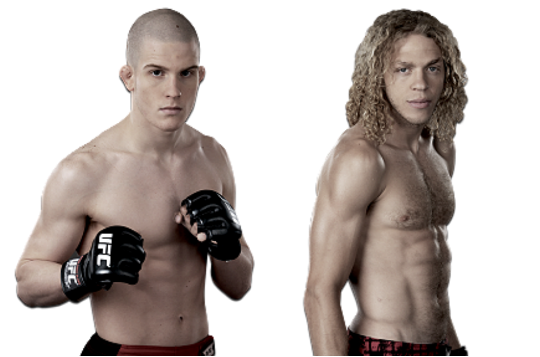 Wins 12
By knockout 3
By submission 7
By decision 2

Twenty-two-year-old Roufusport fighter, Erik Koch, comes into this fight on the heels of a first round “knockout of the night” in his UFC debut over Raphael Assuncao at UFC 128 in March.

He also earned “knockout of the night” in his fight prior to that, against Francisco Rivera, at WEC 52 last November. Koch is an Iowa native and went 8-0 as a professional before signing with the WEC in 2009.

Koch went 3-1 under the WEC banner, with his only career loss coming against Chad Mendes at WEC 47 last March.He is currently riding a three fight win streak.

Koch was on two ProMMAnow.com Radio Network shows this past week: Fist-ta-Cuff Radio and The MMA Outsider. You are definitely going to want to check out those interviews if you have not already.

Wins 12
By knockout 2
By submission 8
By decision 2

Losses 3
By knockout 1
By submission 0
By decision 2

This will be 26-year-old Jonathan Brookins first fight in the UFC since he defeated Michael Johnson via unanimous decision to win The Ultimate Fighter 12 last December.

He was scheduled to fight a couple of times prior to this, but due to injury, had to withdraw both times.

The last fight Brookins lost was back in 2008 when he suffered a third round TKO defeat to current UFC featherweight champion Jose Aldo.

Since then, he has racked up four straight victories in three different promotions, including submission wins over Stephen Ledbetter and Luis Palomino, and unanimous decision wins over Yosdenis Cedeno and the aforementioned Johnson.

Koch will have the striking advantage while Brookins should have the advantage on the ground. Of course, Koch is no slouch on the ground as evidenced by his seven submission victories.

If Brookins can not get this fight to the ground, he is going to be in trouble. Koch’s time spent with the Duke Roufus gang and having stable mates like Anthony Pettis to train with have noticeably improved his stand-up.

The long layoff for Brookins is yet another factor to take into account, not to mention the injuries he had to deal with earlier in the year. Brookins’ wrestling and submission game are his biggest assets and it will be interesting to see Koch’s game plan in this bout.

Will Koch try to beat Brookins at his own game or keep it standing and look for the KO? The oddsmakers currently have the lines at +165 for Brookins and -210 for Koch. Who you got?