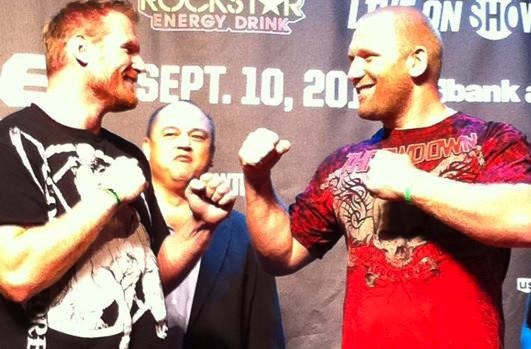 No fighter exemplifies the MMA heavyweight division better than Josh Barnett. This past weekend, he eventually submitted Sergei Kharitonov to claim his 31st career victory and clinch a spot in the Strikeforce World Heavyweight Grand Prix final. However, it is still clear that his run through the tournament, and the rest of his career, is simply feasting on an inferior division.

During the lead up to last weekend’s card, I was shocked by the number of people picking Kharitonov to win. Apparently blasting a fighter who is known for having a weak chin, Andrei Arlovski, gives everyone, not just the knockout victim, memory loss.

It was not that long ago when Jeff Monson forced Kharitonov to submitt in less than two minutes. Barnett is not exactly Roger Gracie on the ground, but he has enough game to best someone who falls for the “Monson Choke” against Monson.

Really, that last sentence is this entire op-ed in a nutshell. Watching Barnett roll around on the ground with the likes of Brett Rogers and Gilbert Yvel, makes him appear fallible. That is because, he is fallible. After all, he is simply a decent athlete with a B-level top-control grappling game. The problem is there are very few heavyweights who can expose his shortcomings. If the self-nicknamer were going into the semifinals of a major tournament in any other weight class, he would be ripe for an upset, but not in the heavyweight division.

On top of that, if you look at his record, he has not been especially dominant against the top competition in the lowly division.

When analyzing a fighter’s record it is important to keep in mind the contemporary circumstances. For example, Gan McGee would not be a big win today. At the time he was undefeated and had just made knees illegal on the ground by destroying Brad Gabriel in front of some Unified Rules framers. However, thanks to the gift of hindsight, everyone knows that wins over McGee, Hunt and the younger Emelianenko are not actually that impressive.

Even ignoring fruits of hindsight, the fact that he tested positive after the Couture fight and the controversy over his split-decision win over Nogueira, he still only has nine quality wins out of 31 career victories. (That is only 29 percent for those keeping score at home.)

Barnett’s success is mostly due to the fact that the heavyweight division is weak. However, he is still one win away from possibly moving into the top five in the ProMMANow.com World Rankings. This upcoming tournament finale will go a long way and determining the legacy of the so-called “Warmaster.”