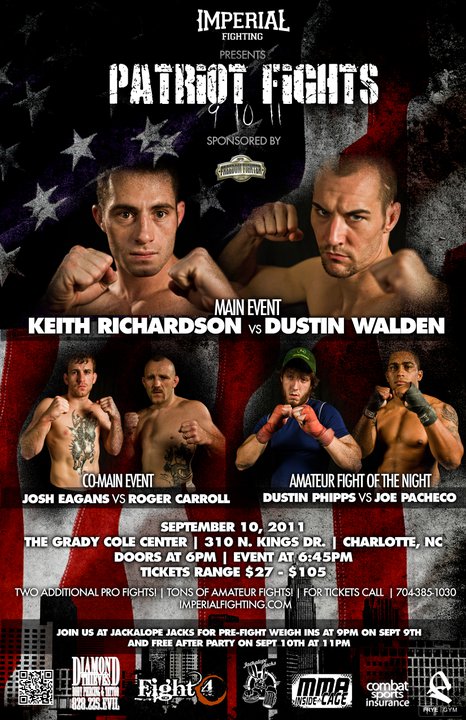 We’ll be getting underway here in a few…

Rd. 1-The fight begins and Forant with nice leg kick, but Tate gets a nice takedown off of it. Tate in side control. Forant obtains full guard as Tate tried to pass. Forant with a inverted armbar attempt but Tate rolls and defends nicely while passing to halfguard. Tate with body shots as Forant gets full guard back. Forant with a high guard now and trying to throw punches from the bottom as the bell sounded.

Rd. 2-Tate with a single leg takedown as Forant goes for a guillotine. Tate moves to side control and lands a nice hammerfist to the face of Forant. Tate with knees to the body as well at times. Forant is able to get full guard but Tate controls him for the entire round for the most part.

Rd. 3-Tate with a single leg takedown. Pretty much rinse and repeat of round 2. Tate landed a few hammerfists and knees to the body but that was about it. He controlled Forant the entire round alternating from half and full guard.

Rd. 1-Hines comes out a tries to find his range with a jab that comes up short. Hines then throws a leg kick that lands but Ison charges forward and puts him against the cage while getting a body lock. He then drop steps and throws Hines to the ground landing in side control. Ison works to get mount after a short stalemate on the ground. Once in the mount position he rains down big shots forcing Hines to give up his back. Ison continues the assault and Hines rolls back to being mounted and eats more shots until the referee saves him.

Rd. 1-The fighters clinch and both land knees and body shots. Crowder lands a jab and a leg kick. Another leg kick from Crowder. Sullivan with a nice knee to the body. They clinch again and Sullivan lands a low blow just before the bell sounds. Crowder appears to be ok.

Rd. 1-The fight begins and they trade with both landing shots. Sweet with a takedown. They scramble and McAdoo gets top position. McAdoo with nice strikes from the top working head and body. McAdoo with heavy shots here from the top. McAdoo tries to pass guard but lands in half guard as the bell sounds.

Rd. 2-Furious pace to this fight with both fighters landing shots. A right hand from McAdoo lands and causes Sweet’s nose to bleed heavily. Blood is pouring from his nose now. The ref stops the fight as has the doctor to check it. Fight resumes. McAdoo with a double leg takedown and the bell sounds without much happening till the bell sounds.

Rd. 3-Sweet lands a nice right hand. Great fight as both fighters trade. McAdoo gets a deep double leg and takes Sweet down. McAdoo working some shots from the top position. Sweet trying to spin off the cage with an open guard. Sweet tries to sweep. Sweet is going for an armbar but McAdoo defends and maintains top position. McAdoo and Sweet trade strikes(Sweet was on his back and McAdoo standing) as the bell sounded.  Great fight.

Rd. 2-Sweeney with a nice double leg takedown and lands a HUGE slam. Sweeney stacks Noriega against the cage and lands hammerfists. Noriega continues to try to work the high guard. Sweeney with shots to the body and continues to work from Noriega’s guard the rest of the round.

Rd. 3-Sweeney with another takedown and lands some nice knees to the body after passing to side control. Noriega gets full guard back. Sweeney with body shots. Noriega is able to squirm and get a triangle with ten seconds left in the fight but isn’t able to fully lock it in. Sweeney just waits it out.

Rd. 1-The fight begins and they trade leg kicks. Sellars with a nice takedown and stacks Kloepping against the cage. Sellars manuevers for a guillotine and goes for it. He pulls guard and locks it in.  It’s deep. He flips Kloepping over and lands in a position that actually takes the pressure off Kloepping it seems. Kloepping gets top position but Sellars throws an armbar attempt. Kloepping picks him up and slams him. Sellars keeps the submission attempt but it appears the slam hurt him. Kloepping postures up from the sub attempt and rains down punches and Sellars offers nothing in return.

Rd. 1-The fighters trade leg kicks to start the fight. Gunter with nice knees to the body as they clinch. Gunter with a nice right hand. Speas lands a leg kick. Gunter with a short left hand as the bell sounded.

Rd. 2-Speas with a body kick and lands another. Sweeney charges forward with a big knee to the body and another. Speas doubles over and Gunter unloads with a flurry of punches. The referee comes in to save Speas.

Rd. 2-Pacheco starts with a nice 1-2 that snaps Phipps head back. They clinch and Pacheco gets a takedown and lands in the halfguard of Phipps. Pacheco with body shos. Phipps gets full guard back. Pacheco lands a few shots from his guard as the bell sounds.

Rd. 3-Phipps lands a nice leg kick. Pacheco with a nice 1-2 and they clinch. Pacheco with a takedown from there. He is in Phipps halfguard. Pacheco passes to side control and lands knees to the body off and on for the rest of the round.

Rd. 1-Forant gets the double leg takedown landing in Wodjak’s full guard. Forant with head/body shots. Forant to side control. Wojdak scrambles and Forant gets another takedown. Forant takes his back and has the rear naked choke locked in…but Wojdak defends somehow. Forant moves to side control. Wojdak tries to answer with elbows from the bottom. Forant takes his back again and works for the rear naked choke as the bell sounded.

Rd. 2-Forant with a takedown and lands in side control. Knees to the body from Forant. Forant mounts Wojdak with about 4 minutes to go. Forant lands some nice strikes from the mount. Wojdak gives up his back and Forant goes for the choke briefly before landing some strikes. Wojdak then rolls back to being mounted and Forant is just relentless here with strikes and the referee comes in to save Wojdak.

Rd. 1-The fight begins and Eagans throws a kick that misses. Carroll responds with a headkick that lands. They clinch and Carroll throws Eagans to the ground. Eagans works and gets back to his feet. Carroll is working to set up a guillotine choke. It locks it in and pulls guard with it. Eagans is defending. He lifts Carroll high in to the air and slams him to the mat. Carroll still has the guillotine and it appears that Eagans tapped as Carroll tells the refereee something. The ref moves in and stops the fight. It appears that Eagans has hurt his shoulder as the doctor comes in and is checking him over.

*Edit…just got clarification from the referee. Eagans tapped because of a shoulder injury caused by the slam.

Rd. 1-Richardson with the takedown. He picks Walden up and slams him to the mat. Richardson with some nice ground and pound while posturing. Richardson mounts Walden and lands more shots. Walden escapes the mount and lands a big upkick but Richardson shrugs it off. Richardson lands another big punch after posturing. He is now in side control. Richardson takes his back and locks in the rear naked choke but the bell saves Walden.

Rd. 2-Richardson with the takedown. Ricardson trying to pass Walden’s guard. He does and is now in side control. Richardson works and takes Walden’s back and locks in the rear naked choke forcing Walden to tap.

That concludes the event.  Thanks for following along and be sure to check out Pro MMA Now for the full recap on tomorrow!