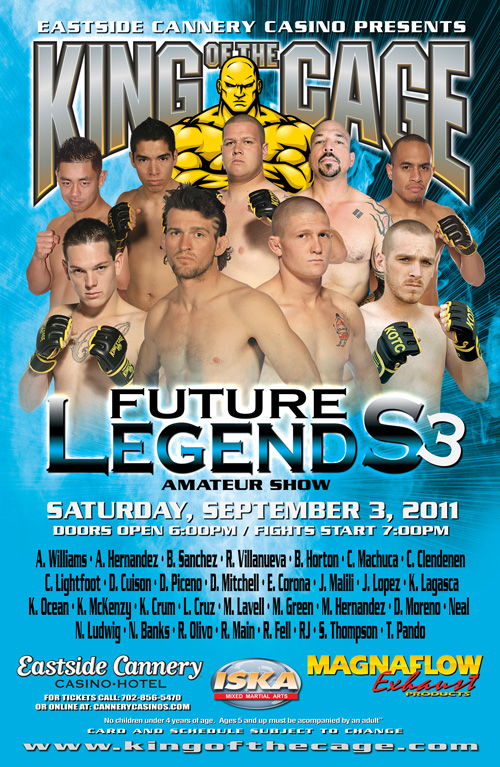 ProMMAnow.com’s own Joe Gugelman was on the scene at the Eastside Cannery Casino in Las Vegas Saturday night to cover King of the Cage’s “Future Legends 3”.

The Main and co-Main Events featured for the first time ever in KOTC history, two Amateur Championship matches. At 155 lbs., Jacob Mallili faced Aaron Williams, and Kurt Crum and Kirby Mckenzy squared off for the 170 lbs. Championship. Two of these four fighters made history becoming the first ever crowned KOTC amateur champions.

Round 1 – Big knockdown early by Malili. Williams competes a single but falls into a RNC position. He escapes, and ends up on top against the cage. Malili works his way back to his feet. Over-under for Williams, working the legs with knees. NICE judo throw by Malili and he lands in side control. Williams regains guard. GNP by Malili. Open guard by Williams. Sweep by Williams. Malili threatening with a guillotine, loses it. They scramble with Malili windind up in full guard with 30 sec left. Crowd going wild for Williams. Chanting his name. 10-9 Malili

Round 2 – Other side of crowd now chanting “Jacob”. Trip takedown by Williams. In side control along the fence. They’re scrambling, with Williams landing some body blows. Back to the feet, crowd goes nuts. Williams is stalking Malili. Williams eats a kick as he shoots for a single. Gets Malili up against the cage, and finally completes the takedown into side control in the center of the cage. Knees to the body by Williams. Malili is keeping him from passing by holding a one-arm guillotine attempt. Round ends with more knees by Williams from side control. 10-9 Williams

Round 3 – This round is likely to decide the title. Both swing and miss with big shots to start. Williams takes the center and shoots for a double. Up against the cage, he’s trying really hard for the TD. Malili circles out. Williams breaks free after eating a few knees to the body. Williams again shoots, this time for a single. Malili showing good balance. Seperated again in the center, both men seem tentative to let their hands go. Malili lands a big hook up against a cage after shrugging off a TD attempt. Williams with control against the cage, delivering knees. Crowd chants “Aaron” again. Williams completes a single into side control, but Malili quickly regains his feet. Williams winds up pressing Malili against the cage as the round ends. Super thin margin.  I gave the final round to Williams 10-9, but it could go either way.

Round 1 – Kirby comes out with a high kick attempt to start. Kurt lands a flurry against the cage, and is able to get a TD. He takes Kirby’s back off a scramble, and is working hard to flatten Kirby out.   Kirby defending well so far, but now Kurt rolls to his back, still with both hooks in. He’s riding high now though, but postures up and lands some big GnP. He gets off center, but is able to lock up the RNC and gets the tap. It’s a clean sweep for Sin City Syndicate (Throwdown) in the title fights.