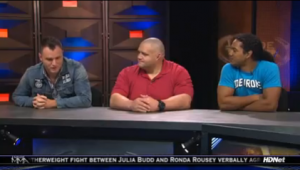 The guys also recapped UFC 134, former Strikeforce heavyweight Brett Rogers and his wife set the record straight about the fighter’s recent legal woes and Gardner talked about making another run at the Olympics.

Also, Bas Rutten reported that he spoke with Alistair Overeem this past week and it is looking very promising that the former Strikeforce heavyweight champion could be signing with the UFC very soon! Rumors are he could face Brock Lesnar in his UFC debut.