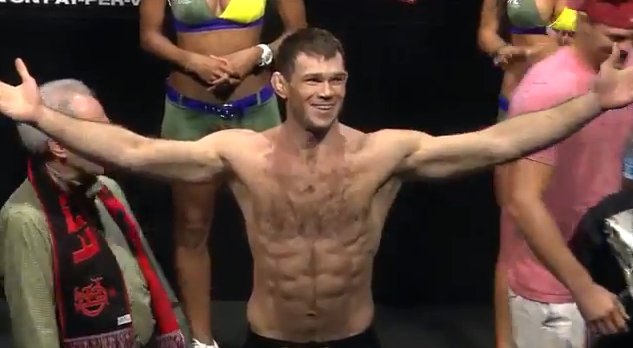 In college, my baseball coach often told me that the best motivation is the self starter. To become great you should be able to motivate yourself to do the things necessary to reach the goals you set for yourself.

Forrest Griffin was a self starter, but that motivation seemed to be harder to come by according Griffin in a pre-fight blog he wrote leading up to the rematch with Shogun Rua at UFC 134.

I honestly didn’t believe Griffin in his blog as he is overly self deprecating at times. However, after watching him perform briefly at UFC 134 I do believe there is some truth to what he wrote:

It quit being fun when I realized I wasn’t getting better. I’m plateauing or almost getting worse sometimes. One of the essential elements to have in this is your perceived expectation of the future, and I’m a painful realist, so I realized that I’m not going to get better; this is it. It’s only gonna get worse from here on and you fight as much as you can, you fight until you don’t have it anymore, and then you fight a couple more times after that.

There are a lot of things we can bring up that may have factored into the way Griffin performed on Saturday night.

I can remember when my wife was going through labor giving birth to our first born, and let me tell you when I say that NOTHING else mattered at that point. I was focused solely on the idea that I was about to become a father and wanted concentrate on being there for my wife. I can remember going up to hit in college after already being 3 for 3 in my prior at bats and having the mindset that it wasn’t a big deal if I didn’t get the fourth hit that day. I can remember playing against competition that I deemed inferior and lacking the motivation to concentrate as if I was playing against the #1 team in the country. Anytime you lack motivation and have things distracting you from the task at hand you are going to have problems.

So with that said where does Forrest Griffin go from here?

Griffin just turned 32 years old in July with a grand total of 25 professional MMA fights since 2001. So he’s not old, and he doesn’t have a large number of fights for someone that’s been in the game for over a decade but he has been in a few ‘wars’. Griffin has fought twice per year since 2007 which includes a near 15 month layoff from November 2009 to February 2011. He’s 2-3 since winning the UFC light heavyweight championship against Rampage Jackson with all three of those losses coming via KO/TKO. The two wins have been close decision wins over aging MMA fighters Rich Franklin and Tito Ortiz.

I think it’s clear that Griffin’s best days are behind him and he stylistically he doesn’t match up very well with anyone that is considered a top 5 light heavyweight. He’s a big light heavyweight but lacks the wrestling to compete as a heavyweight. At this point in his career, I think it would be the appropriate time to complete the trilogy with Tito Ortiz as both guys are coming off losses now. Of course Ortiz won the first fight back in 2006 with Griffin winning the rematch in 2009, and I think it’s worth noting that both fighters won their respect fights via split decision. Ortiz has enjoyed a resurgence of sorts with a huge win back at UFC 132 over Ryan Bader before getting dismantled by Rashad Evans at UFC 133 while fighting on short notice. Ortiz has stated that he wants to continue to fight ‘top fighters’ and a fight with Griffin fits the bill perfectly since they already have history between them.

If Griffin is unable to best an aging Ortiz it would definitely get worse if he were to keep fighting after that.

2 thoughts on “Post UFC 134: Where does Forrest Griffin go from here?”