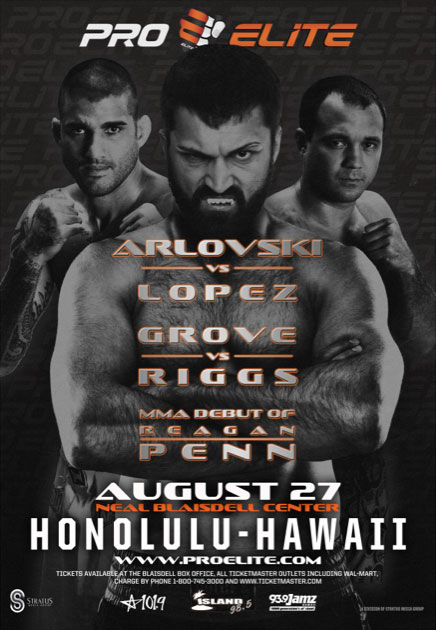 Also on the card is a middleweight bout between The Ultimate Fighter 3 winner Kendall Grove and another UFC veteran, Joe Riggs. Also, Reagan Penn, the brother of former UFC lightweight champ B.J. Penn, is making his pro MMA debut against Paul Gardner.

Women’s Olympic silver-medalist in wrestling Sara McMann looks to extend her undefeated winning streak to four as she takes on Hawaii’s own Raquel Pa’aluhi.

ProMMAnow.com (www.prommanow.com) will provide LIVE results and play-by-play commentary of tonight’s action coinciding with the LIVE stream which begins on Sherdog at 1 a.m. ET / 10 p.m. PT.

Round 2 – Leg kick from Olson. McFedries lands a left and Olson falls to his back once again. McFedries swarms Olson as he turtles up. He would run outside the cage if the door was open right now. Ref lets him up. Overhand right and comes in winging crazy shots. McFedries throws one punch and Olson is on his back once again. McFedries backs up and lets him up. Repeat. Olson just plops to his back almost whenever McFedries attacks. Big leg kick stuns Olson. Olson shoots, stuffed. Leg kick from McFedries. Body shot from Olson. Inside leg kick from McFedries, again, Olson falls to his back and McFedries busts him in the ribs and head over and over until the ref stops it. — The replay shows a beautiful finish. McFedries buckled his leg dropping him to one knee with a leg kick. Then landed a punch combo that put Olson on his back where he finished him off. Nice combo of violence.

Round 1 – McMann looks like a beast — that’s a good thing. McMann is 30 years old. This her 4th fight. Knee to the face from McMann, they tie up and McMann puts her on her back. Pa’aluhi has full guard closed. McMann slams her on her back hard once Pa’aluhi pushed her off and got up. McMann inside full guard. Very fast pace here. Pa’aluhi is game as they tie up and McMann easily puts her on her back again. Pa’aluhi showing a good guard. McMann with big punches to her side. McMann passes to side control. McMann moves to mount. Pa’aluhi sweeps immediately. Sweet. But McMann sweeps her, wow! Ref stands Pa’aluhi up as McMann backs up. McMann gets her back down and is on top in half guard with less than a minute to go. Pa’aluhi gives an upkick that knocks McMann back and she gets to her feet. They tie up and dirty box. Elbow from McMann. Great fight. Fight of the night so far. 10-9 McMann.

Round 2 – They exchange punches and McMann slams her heard on her butt. McMann takes full mount and jackhammers her face like a meat grinder. Raquel scrambles. McMann locks her arms around her neck and under her arm from half guard. Raquel recovers full guard. McMann stands up and ref lets Raquel up. They tie up. Raquel backs out, catches a kick, lets it go as they tie up. McMann gets a trip takedown and is in full guard. McMann gets full mount and lands a couple nice punches. Pa’aluhi recovers full guard. McMann stands up, kicks her thighs. Tries to dive in and misses. Raquel has full guard. Shrimps, throws her legs up and controlling McMann’s posture. Looking for an armbar as Pa’aluhi throws her legs up, she changes to a triangle to the cheers of the crowd. McMann postures up and out of danger. McMann 10-9.

Round 3 – The crowd cheers. Left hand from Pa’aluhi. They tie up and McMann throws her to her back. McMann inside full guard as Pa’aluhi starts working from bottom. McMann with punches to the ribs. McMann moves to half guard but ref stands them up. Body kick from McMann and they begin to exchange punch combos before McMann puts her on her back. Pa’aluhi is only 20 years old. Amazing really. McMann looking for a kimura and Pa’aluhi taps out.

Round 1 – Leg kick punch from Heun. Ellis shoots and puts Heun on his back. Ellis inside full guard. Heun defending well, flips Ellis over and gets to his feet. Heun goes for a standing guillotine and Ellis throws him off. Ellis shoots and puts Heun down, gets side control. Heun uses the cage to get up, lands some punches. Ellis dumps in on his back, on top in half guard. Ellis in full  mount. Heun gives up his back, has hooks in. Heun spins and ends up on top. Ellis gets to his feet and Heun lands a knee that knocks Ellis on his back. Heun attacks with punches but Ellis scrambles, ends up on top in full mount. He stretches Heun out. Ellis with some small punches. 10-9 Ellis.

Round 2 – Ellis gets a takedown early, they scramble, Heun gets top position briefly before Ellis puts him on his back. Heun has a kimura and rolls Ellis. Ellis finally gets free, that was close. Ellis takes his back with a choke and Heun taps out. Ellis had no hooks in. Heun was exhausted I’m sure. They kept up fast pace for big guys.

Round 1 – I just saw earlier tonight that Gardiner is from Tennessee. He trains with Shawn Hammonds at Nashville MMA. Used to train with Bad Wolf MMA. Leg kick from Penn and Gardiner shoots. Penn hangs on with a guillotine, takes Gardiner’s back. Penn with both hooks in. He locks on the choke and Gardiner taps out.

Round 1 –  Andrei gets a ton of applause. Lopez throws first, misses. The Stream keeps lagging. They tie up. Knee to the body from Arlovski. Andrei lands a big shot and almost gets tagged on the exit. Leg kick from Arlovski. Lopez with his own leg kick. Right hand from Arlovski, big leg kick. They tie up and Arlovski puts him on his back. Arlovski lands in the mount and starts raining punches as Lopez covers up. Arlovski looks for an armbar it looked like as he goes to side control. He gets back on mount like he hopped on a saddle. Lopez twists and reverses, he takes Arlovski’s back with a figure four leg lock with just a few seconds left. 10-9 Arlovski.

Round 2 – Leg kick from Lopez. Arlovski being tentative. Leg kick. Stupid stream is driving me nuts. I swear; I’m glad they have the streams but it gets annoying.  I’m missing stuff here but I’ll keep with it… they tie up briefly before squaring up again. Arlovski just inching forward. Crowd boos at the slow pace I assume. They tie up and Arlovski pull him to the ground and mounts him in the easiest manner I have ever seen anyone do it. Arlovski rains down punches as Lopez covers up and gets to his knees. Arlovski gets him back on his back, stands over him. Throws a right to the body, again, plops down in side control, moves to a front head lock with 40 seconds left. Arlovski punishes the body. Lopez just turtles up until time runs out. 10-9 Arlovski.

Round 3  – Lopez misses a body shot. Leg kick from Andrei. Body shot, let kick from Andrei. Arlovski muscles him to the ground and Lopez turtles up again. He rolls to his back and the ref lets him up. Tells Andrei “no stomps.” Leg kick and a right hand from Andrei. Lopez standing dead still in front of him. Stream lag and Lopez is on his back with Andrei in side control. Arlovski gets full mount and starts punching. Lopez punches back and Arlovski keeps punching until the ref stops it. Lopez stands up with a bloody face. And Arlovski gets what he most need, a “W”. He picks up Greg Jackson and another trainer and runs them around the cage.

Arlovski is very happy. He thanks Greg Jackson as his camp. Arlovski did get the win but he looked far from great. His stand up amounted to a few leg kicks. He looked hesitant to exchange punches; not to mention Lopez had no takedown defense to speak of.

Round 1 – Leg kick from Grove. Misses a head kick. Big right hand from Grove and Riggs shoots, pushes him into the cage and Grove locks up a quick guillotine, cranks it and Riggs taps out quickly in pain. Grove lost in their first fight 7 years ago. It was Grove’s very first loss way back in 2004 at Rumble on the Rock 5.

Kendall said, “That’s why I was the main event, cause I bring it.”

And… I’m off to bed folks, hope you enjoyed the play-by-plays… adios.