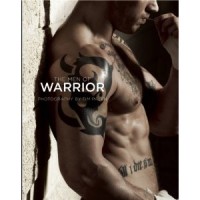 The MMA community is eagerly awaiting the release of the upcoming MMA movie, Warrior.   Early reviews are generally positive about the film’s portrayal of mixed martial arts as a sport, and many people (myself included), hope that this movie can give the general public a better idea of MMA than its predecessors (i.e. Never Back Down).

Men of Warrior is a companion book to the movie, a coffee table book featuring full color and black and white pictures of some of the movie’s cast of fighters including Tom Hardy, Joel Edgerton, Erik Apple, Nate Marquardt, and Ron “RJ” Messenger.

The photographer, Tim Palen, likely will not be recognized by name to many MMA fans, but many have likely seen his work as Palen produced some of the images used to promote the Saw and Hostel movie franchises.

The photography is extremely well done.  Palen did an excellent job of capturing the actors as though they are fighters – to the untrained eye, readers could look at these pictures and believe these were actual fighters (of course, Marquardt is) participating in an elaborate photo shoot.  The 128 page book features detailed shots from beginning to end and is definitely one of the best MMA style photo shoots I have seen.

However, I question how much commercial success the book will enjoy.  While it is a great look at MMA as an art form that most people have not been exposed to, I don’t know how many male fans will want to purchase a coffee table book full of pictures of men who (minus Marquardt) are pretending to be fighters.

If you are a collector of MMA memorabilia, a fan of the movie,  or a big photography fan, then this book would be an excellent addition to your collection as there really aren’t any others like it.  Outside of that, I’m afraid many readers would be bored with it after one or two views.  But, if you have an extra $20.00 to spend on some MMA related paraphernalia, head over to Amazon.com and pick up a copy.