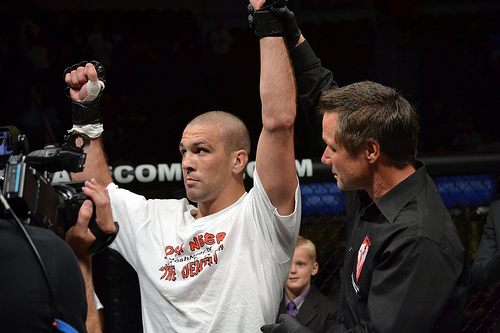 Josh Neer (31-10-1) just wrote the textbook on what to do if you get cut from the UFC; go out fight good competition, put on good performances and win.

Upon being released from the UFC in 2009 after two straight losses, Neer put together back-to-back wins and picked up the Shark Fights interim welterweight title in the process.

In May 2010 he suffered a second round technical submission loss to Bellator 155-pound champ Eddie Alvarez in a 160-pound catchweight non-title bout.

Then news broke Tuesday that Neer had signed a new four-fight deal with the UFC.

“Very happy that the UFC has re-signed Josh, and I think Josh has worked very hard to get back in the UFC. I have managed Josh for a long time , and I have never seen him so focused . He has that fire and desire back.

“Josh has really worked hard on the things he needed to improve on. He is 6-0 since moving to 170 with all his fights ending in the first round. I think Keith is great fight for Josh. Anytime Josh is fighting you can expect a exciting fight.

“When he faced two-time NAIA champ Jesse Juarez recently Jesse had a hard time taking Josh down, and Josh actually took him down.When fighters realize they cant take Josh down it’s going to make them change their game plan.”

In our post-fight interview with Neer last weekend, Neer talked about many of those same things, including how he has been working on his wrestling, his takedown defense and his preference to fight at 170.

Although he is only 29-years-old, Wisniewski has been fighting professionally since 1998. He made his lone UFC appearance in 2005, losing a unanimous decision to Nick “The Goat” Thompson at UFC 56.

UFC on Versus 6 will be headlined with a bantamweight title fight with Dominick Cruz defending his title against Demetrious Johnson. For the full UFC on Versus 6 line-up as it stands see our Upcoming Events page.