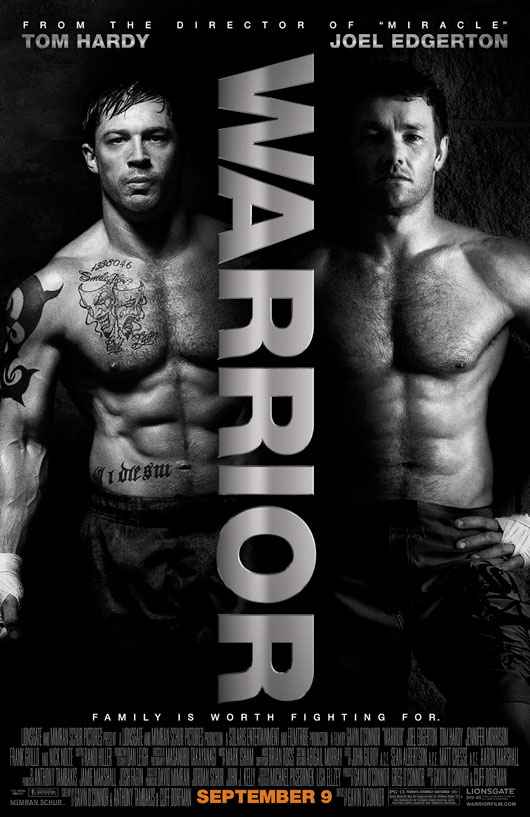 Set in Pittsburgh, Penn., WARRIOR is the tale of two brothers who haven’t seen each other for 14 years due to their alcoholic father and the domestic abuse their mother suffered through the years. With a PG-13 rating, the film is directed by Gavin O’Connor, the same man who directed such dramatic and emotional movies as Pride and Glory and Miracles.

Tommy Riordan (Tom Hardy) is a Marine who is trying to escape his past. Although he tries to keep a low profile, news of how he saved a group of Marines in his unit from drowning makes him a hero.

Tommy’s older brother Brendan Conlon (Joel Edgerton) is a family man and a physics teacher who earns extra money to pay bills and provide for his family by fighting at smoker events at strip joints at night.

When the school administration gets wind of his moonlighting activity, Brendan is suspended without pay until a hearing decides his fate. In the meantime, the bank is set to foreclose on his house within the next 90 days.

With his back against the wall and the disapproval from his wife, Brendan decides to train full-time and take whatever fights he can get to save his family’s house.

Meanwhile, Tommy returns home to get his father Paddy (Nick Nolte ) to train him for the upcoming mixed martial arts Spartan tournament in Atlantic City, N.J. If he wins the $5 million purse, Tommy plans to give it to the wife of one of his closest friends who died in Iraq.

Despite the fact that Tommy hates his father, he knows Paddy is the right man who can train him to win just like he used to do when Tommy competed in wrestling in school.

Although Tommy lives and trains with Paddy, who is now a recovering alcoholic , he clearly lets his father know he hasn’t, nor will he ever, forgive him for the abuse he did to his mother, who died a few years ago.

Through bits and pieces of information throughout the film audiences will also learn more about Tommy’s past and the trouble he’s running from, which is why he wants to remain a loner.

Tommy’s anger is not only directed at his father, but at Brendan too. Their stained relationship is a result of a fourteen year absence and his disappointment that Brendan betrayed him and their mother since he didn’t follow the plan and leave with them.

Brendan stayed behind to be with Tess, (Jennifer Morrison), his high school sweetheart and the girl he eventually married. Brendan, like Tommy, also has a broken relationship with his father and even refuses to allow Paddy inside his home or to see his grandchildren.

All of these dynamics shape the movie and brings the emotion and heart to the story;  MMA is just the backdrop.

Still, the use of MMA in this movie does actually work, and makes up for past MMA movies like Never Back Down, Fighting or Red Belt, which left most mixed martial arts fans soured.

WARRIOR may be a better take on MMA, but it still isn’t 100% realistic. However, that is to be expected considering this is a Hollywood movie and to make the movie fun and entertaining certain liberties are needed.

The most glaring point in the film, other than that ridiculous $5 million dollar prize, is that the plot is predictable.

As soon as audiences learn the brothers are MMA fighters, they know the two will meet at the Spartan tournament and fight one another.

However, since neither fighter is in any way on the same level as the other 14 fighters competing, and who are considered to be the best in the world, it seems truly unlikely that Tommy or Brendan will even make it to the finales.

It is especially unrealistic that Brendan, who is a teacher and hasn’t fought professionally since he left the UFC, could defeat Koba, an MMA Russian champion and badass, played by former WWE superstar and wrestling legend Kurt Angle.

The film was dedicated to Charles “Mask” Lewis, who founded Tapout with Caldwell. Lewis died in a car crash in 2009.

Edgerton had to gain almost twenty pounds of muscle for the film. His body structure was  supposed to look slim, trim and more like a slick technician with his jiu-jitsu moves.

By contrast, Hardy, who was the loner and raging bull, bulked up with 28 additional pounds of muscle and he had to go without carbs for such a long time that JJ Perry, one of Hollywood’s most respected stunt and fight choreography professionals, referred to him as “angry and moody” all the time.

But to achieve the monstrous look that he does in the movie, Hardy had to train differently from Edgerton, who has a background in athletics; Hardy did not.

Both actors were led through their MMA training by the legendary Greg Jackson, who has trained many champions over the years, including Georges St-Pierre. Jackson not only trained Hardy and Edgerton, but he was the technical advisor on set.

Both Edgerton and Hardy completed 85% of their own fight work for the film.

WARRIOR  is a movie about a family who must deal with emotional emptiness, redemption, and love. Paddy’s character is key to the resolution of the conflict between his sons.

Although he is now a recovering alcoholic, he knows his redemption and forgiveness by his boys will be hard to come by. Still, for the sake of his family, he is patient and takes the emotional blows his sons dole out.

He also learns how to reach out to his sons with an unselfish heart. Paddy truly wants both his boys to do well, and is emotionally torn when he knows they must fight one another.

The attention to detail for the MMA fight scenes and the training the actors had to undergo to make them look like authentic fighters on screen will be appreciated by MMA fans.

The most difficult thing audiences will have to deal with is their sympathy and alliance between the brothers. They’ll find themselves rooting for both guys, but for very different reasons.

Although some scenes are over the top and totally unrealistic (again this is Hollywood), for the most part the director did a great job by capturing the specifics of a rarely-portrayed sport and highlighting  MMA in a way so both hardcore and casual fans, as well as people who know nothing about mixed martial arts should enjoy.

The WARRIOR DVD is now available for purchase, or you can purchase it and watch it instantly online at Amazon.com.