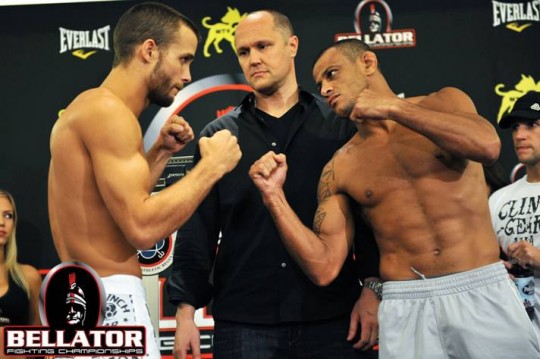 UNCASVILLE, Conn. — Bellator 48 takes place this evening at the Mohegan Sun in Uncasville, Conn., and features Pat Curran and Marlon Sandro going at it in the main event in the final round of Bellator’s Summer Series featherweight tournament.

Also on the card is a heavyweight match-up between Bellator heavyweight champion Cole Konrad and hard-hitting veteran Paul Buentello. Konrad’s title will not be on the line.

Bellator 48 will broadcasts LIVE at 9 p.m. ET (6 p.m. PT) exclusively on MTV2. Join us here at ProMMAnow.com (www.prommanow.com) as we provide LIVE results and play-by-play commentary of all the action.

Round 1 -Nazare with a double jab followed by punches that connect first. Lands a tight uppercut and a right right hand. Barrantes exchanges with Nazare in the pocket but gets the worst end of it, eating a few good ones. They clinch up against the cage. They separate, combo and body kick from Nazare. Nazare hunting. Leg kick from Barrantes. Leg kick from Nazare. Barrantes grabs a collar tie but gets taken down. Nazare inside his full guard now. Two minutes to go. Nazare working the ground and pound, lands some elbows to the bloody face of Barrantes. Right hands like jackhammers from Nazare. Barrantes tries to get up, Nazare puts him back down. Barrantes getting pummeled. He tries to get up. Nazare looking for a guillotine. Goes for it with 10 seconds to go. No dice. 10-8 Nazare.

Barrantes’ right eye is completely closed and the doctor will not let him go into round three. Nazare improves to a perfect 10-0 record.

Round 1 – Touch gloves. Seth blocks a high kick, lands a leg kick. Front kick from Seth. Right hand from Seth on the end of a one two. Spinning back kick from Seth lands below the belt and Ricco goes down. Replay shows the heel catching Ricco in the nuggets. Here we go after about a minute. Leg kick from Petruzelli. Body kick from Rodriguez and Seth shoots, halfway pulls guard. Seth stands up and out. Head kick from Seth scores. Lazy leg kick from Ricco. Again. Big leg kick from Seth, he attacks with punches. Ricco with a knee to the face from the clinch. Body kick. Huge leg kick from Seth, Ricco pins him to the cage. Knee to the body from Seth. Knee and uppercuts from Ricco. Seth blocks a high kick. Ricco shoots from outside, stuffed. Ricco checks a leg kick, lunges with a sloppy left. Spinning back kick from Seth  knocks Ricco backward. Ricco rushes in and eats a big right hand and goes down. Seth follows up with a flurry of punches and Ricco is out. Beautiful finish for Petruzelli and he stops Ricco’s 12 fight win streak.

Round 3 – Leg kick from Konrad. Front kick. Leg kick. Buentello with a jab. Konrad with a leg kick. Buentello comes in swinging looking for the big one but ends up on the ground and Konrad pounces, takes Buentello’s back. Buentello gets out of the choke but Konrad is on his back, pushes Buentello onto his back. (The commentator — I think it was Jimmy Smith — made the statement that Mo Lawal never won a national title. He’s wrong about that. Lawal helped Buentello train for this fight.) Ref stands them up as Konrad was on top using ground and pound. Nice left hand from Buentello lands on the button. Konrad has a nice mouse under his eye. He lands an uppercut. Buentello comes in with a big uppercut but hits the body. Konrad presses him to the cage, lands a knee. Konrad 10-9, 30-27 as I see it.

Round 2 – I love this referee. They exchange leg kicks. The ref has the best voice. Leg kick from Curran. Overhand right from Curran knocks the sweat off the back of Sandro’s head. Nice right and uppercut from Sandro. Overhand right, uppercut from Sandro. Curran cut over his left eye. Curran ties him up, puts Sandro’s back to the cage. Sandro backs out and squares up. Dodges a hook. Ducks another one. Lands a right in the middle of a three punch combo. Leg kick from Sandro. Head kick from Curran, Sandro walks through it. Body kick from Curran. Left hook to the body from Sandro. One minute to go. Curran throws a punch combo, gets Sandro ducking to the left and catches him with a big kick to the head and Sandro goes out, Curran follows up with a couple unnecessary shots before McGruff pulls him off. Highlight reel knockout. Beautiful.