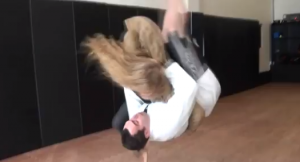 What do you get when you take a female Olympic judoka, a hardwood floor and a smack-talking MMA reporter with a microphone? What you get when it’s all said and done is a sad little man laying on the floor crying out in pain.

Reporter Aaron Tru talks with Olympic medalist Ronda Rousey about her recent controversial armbar submission win over Sarah D’Alelio at Strikeforce Challengers 18 last weekend in Las Vegas. Ronda explains what happened and she also shares her thoughts on what she feels the future holds for women’s MMA and herself.

After watching this, be sure to check out Ronda’s interview from her appearance last night on The Cageside Beat, the official radio show of ProMMAnow.com.