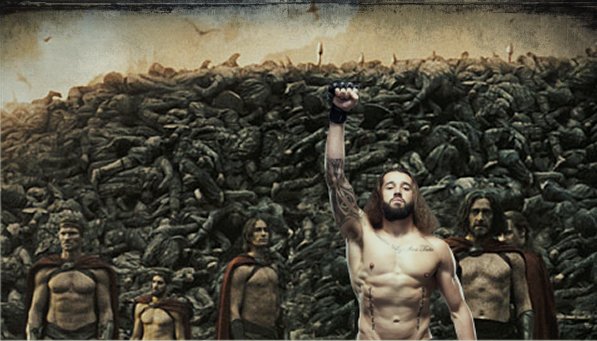 Joseph Henle (4-0-1) is fighting Gabriel Lopez this Saturday as the main event on the “BAMMA USA: Badbeat 3” card, but he has his eyes on the bigger prize.

A return to the UFC.

Henle was a cast member on The Ultimate Fighter 11 in 2010 as a member of Team Liddell. Constantinos Philippou is the fighter that Henle submitted to make it in the house, and it just so happens that Philippou just recently earned his first win in the Octagon with a split decision victory over Jorge Rivera at UFC 133.

The post-TUF second shot that Philippou got with the UFC is exactly what Henle is looking for in the near future. Despite failing to even make the cast for TUF 11, Philippou stepped in as a late replacement for Dan Miller at UFC 128 to secure a spot within the organization.

Before any discussions of Henle getting another shot at the Octagon can happen, Gabriel Lopez stands as the latest obstacle in his way. Lopez happens to be the third opponent slated to face Henle at this weekend’s “BAMMA USA: Badbeat 3” event, after the first two fighters dropped out of the bout for various reasons.

“One guy blew out his knee, then another guy pulled out with what he said was an issue with the promoter,” Henle told ProMMAnow.com. “Finally this last kid took the fight, and I’m just happy to have an opponent.”

Henle views all of his opponents as an opportunity to put together a string of wins that could land him back in the UFC.

“To be honest, it really doesn’t matter, no matter who my opponent is going to be, I’m gonna smash him,” Henle said. “It’s just another body in front of me.”

A change of opponent is all too common in MMA, but Henle has seen that sometimes the fact that he was on The Ultimate Fighter contributes to problems in finding fights and securing opponents.

“It’s hard to find fights to be honest,” Henle told ProMMAnow.com. “People see my name and they are like, ‘Oh that guy was on the show.’ Some guys that are near my record but don’t have my notoriety, will ask promoters for ridiculous amounts of money. I had a promoter tell me that he simply didn’t have the money to pay me and an opponent.”

Despite some adversity since the show, Henle feels that the positives far outweigh the negatives.

“I get a lot of good and bad about my time on TUF 11, only because it happened so early in my career,” Henle said.

“I would have never expected to make it six months after I went pro, and I wasn’t ready for that experience. The show was good because I felt that the guys were better, but that I still had a chance to compete with them. Now it’s the year after and with all of this training, I feel like I’ve been able to raise my game to where I should be in the UFC. Now I just have to go out and prove it.”

Henle also credits his time on the show to opening up doors to further his advancement and improvement in MMA. He has since became close with UFC fighter Mark Munoz and has a whole slew of training partners over at Reign Training Center to test just how “well rounded” he feels from day-to-day.

“If you feel like you have good hands, go spar Jay Silva, and he’ll make you feel real stupid,” Henle said. “You think your wrestling is on point? Ask Brett cooper or Mark Munoz to come get at you. You need somebody that’s good all around to whoop on you, then go get “Mayhem” Miller. I’m really impressed with his work ethic and his skill. Everybody sees him joking, but that man is hard.”

One thing that hasn’t changed since Henle’s time on The Ultimate Fighter is his dedication to kids in his community. After taking a year off, Henle is back coaching high school football, currently as the defensive line coach at Thousand Oaks High School, and it’s his players that bring him a lot of inspiration.

“Working with kids is something that is very special to me,” Henle said. “After a hard day, after practice, or after training, kids are talking to you, they look up to you and they see you as a role model. That’s something that makes it all worth it, so it’s definitely something i had to get back into.”

The same dedication and care Henle gives to his players, he gives to his fans. Henle is very active with social media and spends as much time as possible interacting with his fans, especially on Twitter.

“People underestimate the little things they do for people,” Henle said. “Sometimes they don’t realize how big of an impact that it can have on somebody else. I recently shouted out some of my followers from Twitter, and they tweeted me back just amazed that they would be mentioned.”

The support that fans give back to Henle is just important to him.

“I get a ton of support from fans on Twitter, people that catch me on Facebook, or on my Facebook fan page,” said Henle. “Anytime you have had a long day, or a bad training session, you get on Twitter and they are like ‘Hey what’s going on, you’re my favorite fighter,’ so that’s really cool. I feel like it’s an extra kick in the pants everytime I turn on my phone, that other people want to see my succeed.”

It would only be fitting that ProMMAnow.com would continue Henle’s tradition of the Twitter follower shout outs. So here we go:

Be sure to follow Joseph Henle on Twitter at @leonidasmma. Joseph Henle would like to acknowledge and thank his team, management, training partners and the following sponsors.