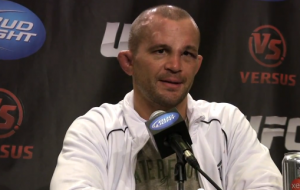 Thirty-six-year-old Indianapolis fireman and longtime UFC welterweight Chris “Lights Out” Lytle (31-18-5) has retired. The veteran brawler defeated Dan “The Outlaw” Hardy (23-10, 1 NC) Sunday night in the UFC on Versus 5 main event with a third round guillotine choke submission that won him “Submission of the Night” and “Fight of the Night” honors, boosting the number of fight night bonuses he has won during his UFC career to 10.

The following video shows Lytle at the post-fight press conference fielding questions from the media and talking about why this was the right time for him to walk away. Lytle wanted to retire on his terms and while he was still winning as opposed to so many other fighters who stay around too long and tarnish their records and legacy. His main motivation seems to be that he wants to spend more time with his family and you can’t fault him for that.

Lytle has given UFC fans some great battles and great memories over the years. If there is anyone who is the epitome of the phrase “leaving it all in the cage” it is Chris Lytle. He said if he was going to stick around and make a run at the title he was going to have to change his style to be more conservative and that was just not in him to do that. ProMMAnow.com salutes you Chris Lytle — you were one of the greats!

Touch of gloves to MiddleEasy for the video.